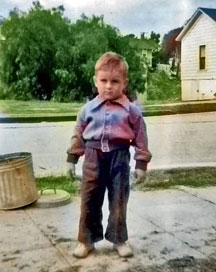 I can't tell if this is creepy or cool.  Someone out there in cyberspace snagged the above photo of yours truly and colorized it.  I vaguely recall sharing it -- I thought in a Fry Day email -- mostly to show that there used to be, in addition to trash pickup, GARBAGE pickup -- and the little garbage cans were awash in vile smells and swarms of flies.  Anyway, this was on Edgemont Street in what is now known as South Park, around 1950.  The house behind me, shown below in a current Google street view shot, was where my cousin Jim Harper '68 was born -- or at least the home he came home to from the hospital. 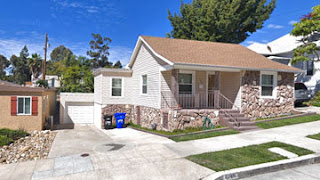 Someone who collects vintage traffic signs posted this on Facebook.  I got to wondering where it originally stood.  Then I thought someone out there could figure it out using the numbers.  I've sealed my guess in an envelope in my desk drawer. 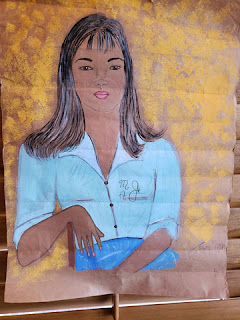 Phil Hill '61 posted some student artwork on Facebook and wondered what became of Mr. Gibbs -- his art teacher at Horace Mann AND Crawford.   Phil wonders if you can identify the girl in the painting.  She was was a fellow classmate.   The big clue, he notes, are the monogrammed initials on her blouse.  They would appear to be M A J, or another variant. 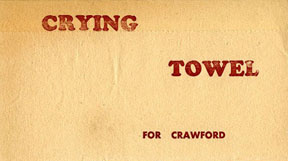 Here's the Crying Towel Kearny students handed out at the CIF Finals in Balboa Stadium on December 1, 1961.  How'd we do?  (Hint:  It was the year the football team went undefeated).  Click HERE to check out the football program sold that night -- and read the article written about the game by Bill Center. 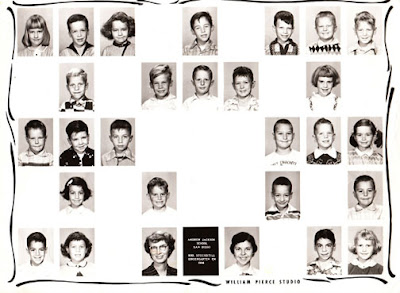 Thought I'd revisit some previous posts.  Here's the 1956 Jackson Elementary photo from Michael Naiman '68.  Click HERE to peruse his other class photos -- except 3rd Grade.  That one's missing.

Dell Ludwig ’59 passed away November 27, 2018 at home from complications due to Parkinson’s Disease.  He was born to Margaret and Leo Welker in St. Anthony, Idaho.   When he was three, he was adopted by his new stepfather O.C. Ludwig and raised in San Diego.  In high school he was active in basketball, baseball, and track.  He attended BYU and graduated in 1967. After graduation, a friend talked him into moving to Detroit where he met his wife Sandra Hilden. In 1973, they moved to Pocatello, Idaho to be closer to family.  Dell worked for Sears, School District #25, and retired after 22 years at the post office. He loved photography, scrapbooking, drawing, ballroom dancing, collecting baseball cards, fantasy baseball leagues, and genealogy.  (He did not have a photo in the '59 Centaur)