My neighbor Sandy dropped by the other night to let me know that her renters, in the house next to me would soon be leaving, and that she was interviewing a new tenant but wanted to check with me first.  She's very considerate.  He's 30.  OK.  He's a musician who's been hired to play in the Summer Pops.  OK.  He'll need to practice during the day.  OK.  He plays the tuba.  Oh, really? That should be interesting.  I'll keep you posted. 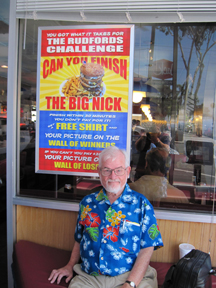 I wore my subtlest Hawaiian shirt to Rudford's Restaurant last week to hook up with Jim Daigh '64 -- and I almost blended in.  Jim was there to be interviewed by Ken Kramer about the day 49 years earlier when he took the great picture of John F. Kennedy in front of Rudford's.  You can revisit the site and see a couple of photos of the interview taken by Jim's wife Marla.  Nancy took the portrait of me, plus another shot on the web page.

Guess Which Colt Is Greek? 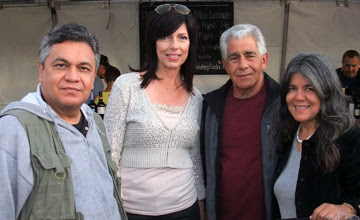 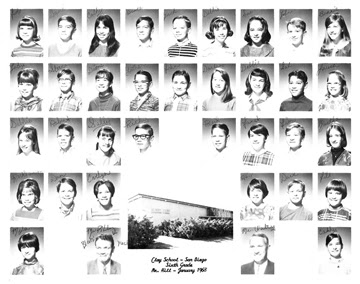 Ann Lebus Schmidt '74 finally figured out how to use her scanner, and forwards her 4th, 5th and 6th Grade (above) photos from Henry Clay Elementary School.  What a sweet sentiment she shares in saying good bye to Mr. Hill.  Reminds me of when I taught at Hale Junior High.  They loved me -- or so I thought.  I was paging fondly, not long ago, through one of my annuals and sat up straight when I spotted "You Suck Mr. Fry!!"  It was unsigned.  Ah, kids

Your continued work to keep all of us Colts connected is AWESOME!  Curious minds wonder if taking all the "spray net nozzles'' was for the fun of it or did they really serve a purpose?  Eileen Baumgarten Gaudette ’74

(If you have no idea what Eileen is talking about, join the club.  Turns out she actually READS the stuff I put out, including the Golden Anniversary Pacer, in which one John Fry willed his "collection of spray nozzles to the people from whom they were taken".  It must be true because it's in the paper, but I have absolutely no recollection of such a thing -- JF)

Thanks for the heads up on Profesora Brownell.  I will send out a card this morning and maybe it will get to her in time! I went on to major in Spanish language and history at San Diego State.   I never used my Spanish for its intended use.  I wanted to be a teacher, just like Ms. Brownell.  I ended up marrying just out of college, having three kids (all who speak Spanish!!) and becoming a real estate broker when they were all in school! But, as someone famous once said "Educate a man, and you educate a wage earner; educate a woman and you educate the children of the world".  So Ms. Brownell taught me the love of the land and the language, and I passed it on to my kids!   I have used my Spanish on many, many trips to all parts of Mexico. so it never went to waste!!  Jaye Apcenski Munger ’60
You and your amazing website, and e-mail list.  Another wonderful stack of birthday greetings for Mom.  She enjoyed every one of them on her 101st Birthday.  Thank everyone who responded.  Steve Brownell ‘64

Yes the 64 prom was at the El Cortez when it still had a glass elevator.  That and the graduation ceremony were the only "senior" events I was able to attend -- Karen Richter Tolvo ’64

The '64 Prom was at the El Cortez. But I can’t remember the where the bowling alley the after prom was at. I know it was right beside Hwy. 8 -- Dennis Mullican '64

Tell Maureen Nepp Millman it was the El Cortez Hotel.   I recall riding the glass elevator up the side along with Carol Fisk -- Ron Dixon ‘64

Yes, it was held at the El Cortez complete with an actual Carousal in the ballroom!  I think "Carousal" was the theme! See pictures in the "64" Annual! Bob Zito ’64

The comment by Maureen reminded me of the saying "If you can remember the ‘60s, you really weren't there".  Thanks for the smiles every Fry day -- Pat Chambers ’60


Are you a Turtle?


John, if someone asks you "Are you a turtle" the correct answer is "You bet your sweet ass I am". I have no idea of the origins, but I believe it was in the mid sixties when I first heard it -- Rick Combs '59

John. the way I heard the story was: when somebody ask you if you were a turtle you had to say "you bet your sweet ass I am" If not you had to buy them a drink. ( An old astronaut joke) -- Jim Smith ’63


Miriam Kanter Plotkin '72 let me know that she is an authority on real turtles and tortoises AND, in fact, IS herself a turtle.  Well, she sent me some of the double-entendre questions.  I would share them but I can't for the life of me figure out clean answers to any of them.  Doesn't matter.  All is revealed in the next letter.
Hi John,Once again I had fellow Colts vouch for my memory and sanity. I heard directly from Donna E. Johnson ’62 and Leslie Benjamin Wichers ’71 who both are members of The Turtles Club.  Leslie sent a Wiki link and given your interest in military aviation you might find the WIKI LINK to be of interest.   Again thanks for providing me the opportunity to once more prove my sanity to my wife -- Ed Schoenberg  ‘70