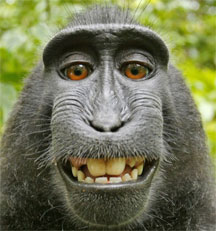 I don't know if you've been following the case of Naruto.  In 2011 the Crested Macaque swiped the camera of British nature photographer David Slater and took this selfie.  Slater included the photo in a book he published and PETA took him to court saying some of the profits were owed to Naruto  Click HERE to see how the 9th District Court ruled in this matter. 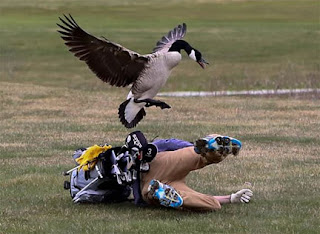 I hate geese.  They're like snakes with legs.  We had one in Spring Valley when I was a toddler and it once grabbed me by the rolled up hem on my blue jeans and dragged me kicking and screaming.  This week in Michigan a high school golfer got between a Canada Goose and its nest.  Click HERE for the whole story. 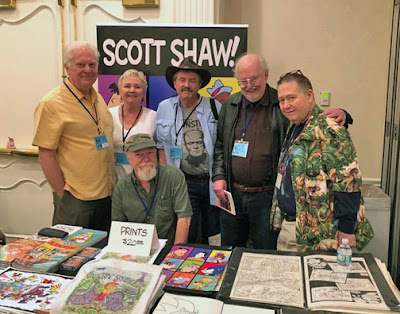 Here’a s photo of folks gathered at the Scott Shaw! table at last week’s San Diego Comic Fest. Scott has been a cartoonist and illustrator and involved in TV and related projects since graduating from Crawford in 1968.  George Sorensen '69 (lives in Lake Oswego, Oregon and works for Boeing), Jann Andrews)Morris ’69 (lives in Logan, Utah and already has great grand kids), Jan Tonneson (seated -- graduated from Helix but hung with the Crawford cartoon crowd),  David Clark ’69 (lives in San Diego and has been in the wine business for decades), Greg Bear ’68 (lives in Seattle and is a SyFi book author), Scott Shaw ’70 lives in LA, and works in Cartoon and TV) 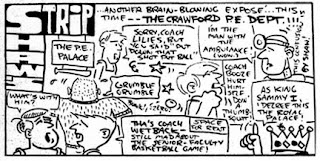 Scott Shaw gets a two-fer.  Here's some of his artwork from the April 25, 1968 Golden Anniversary Pacer.  Click HERE to read all four pages. 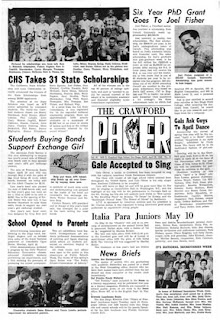 If you have fond memories of the early days of the San Diego Chargers Rene Maza '74 thinks you might enjoy the Tales From The American Football League web site. 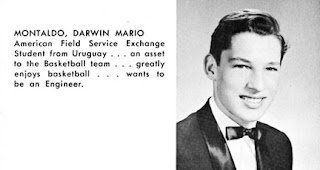 Darwin Montaldo ’60, Crawford's first foreign exchange student, died in Montevideo, Uruguay, on August 23, 2016 of lung cancer.  He is survived by his wife, Silvia Iglesias, his children, Daniel, Laura, and Verónica, and his siblings, Siboney and Dante.  ASB President Ernie Griffin and his family were Darwin’s host family. Ernie and I were told of Darwin's death by his daughter, Laura, who found emails exchanged between us and her father.  My parents, sister Margaret '59, her close friend Carol Drogin '59, and I visited the Montaldo family in the summer of 1960, having a wonderful dinner at their suburban home in Montevideo -- Bob Richardson ’61