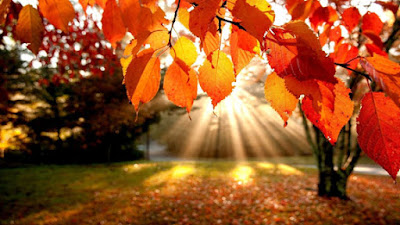 Could you feel it when Summer gave way to Autumn this past Wednesday?  Me neither.  I'm sure the cool weather will be along any day now.

Susan Marshall Gordon is not getting the response she's hoped for regarding convertibles for the October 16th Homecoming Parade.  Let me know if you can help -- or have any ideas. 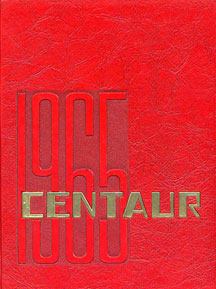 Paula Wroclawski Masters and Donna Foster Westfall purchased my last two '65 Centaurs.  I will be sending a check for $100 to the Crawford Foundation.  And hats off to original yearbook advisor Jesse Morphew for donating them in the first place.

Did you hear me last week on NPR's "Only A Game"?  Bill Littlefield asked me to read from an email I sent about Draftkings.com.  Click HERE if you'd like to listen in. 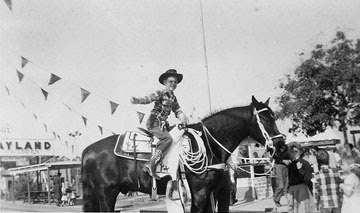 Apparently spurred on by last week's photo of "Cowboy Johnnie" Fry, Ron Jagodinski discovered a 1953 shot of himself at Monte Hall's Playland.  Click HERE to see an enlargement and caption. 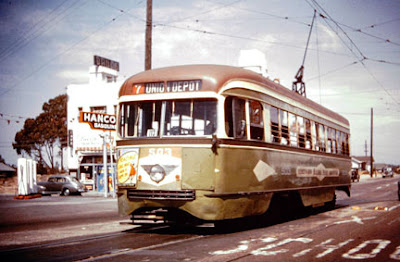 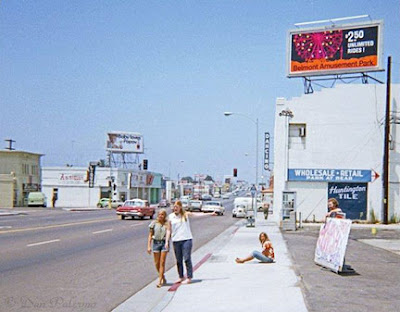 Here's a different view of University and Euclid, a fund-raising car wash, taken in July 1971 and posted on Facebook by Dan Palermo.  That's the Silverado Ballroom at the right. 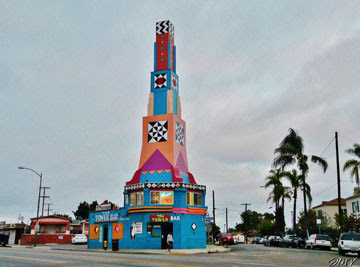 Photos continue to pop up on Facebook of the area around Euclid and University, lately of the Tower Bar.  Click HERE to see some historical photos, and HERE to see recent shots by photographer extraordinaire Julie Vaughn. 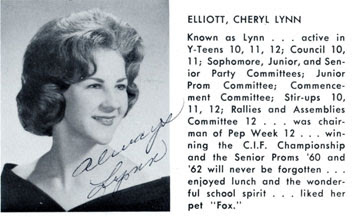 Lynn Elliott Townsend '62 passed away last week.  In June Lynn learned that her cancer had returned.  Treatment was unsuccessful. Two weeks ago, Lynn was moved from home hospice care to a lovely Hospice House in Del Cerro.   Additional details should be forthcoming.  Condolences can be sent to her sons Bobby and Chris Townsend, 4816 Adams Avenue, San Diego  CA  92115 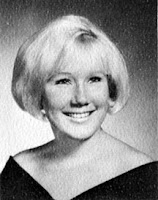 Reggie Adams '74 passed away August 30, 2015.  He was a resident of Mansfield, Texas and had served his country in the United States Army for 21 years. 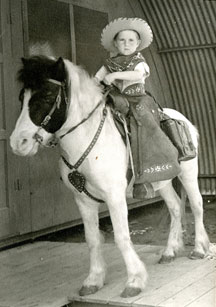 Remember when folks showed up in the neighborhood with a pony and a camera?  This 1948 shot of "Cowboy Johnnie" Fry was taken right at the front door of our Quonset Hut in the 32nd Street Naval Housing. 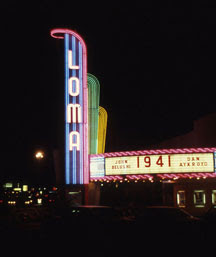 I'm pretty sure you've seen this photo of the Loma Theater before, but I'll run it by you again.  Click HERE to look at some other movie marquees I photographed around 1980.  Remember leaving the movies without disconnecting the speaker?  Remember when one stalled car could keep almost everyone from leaving the lot?

Craig Juleen '70 checks in from Alpine, a little upset that he missed his class reunion.  He especially hoped to make contact with Brian Seltzer and Randy Naiman.  I don't have emails for them.  Do you? 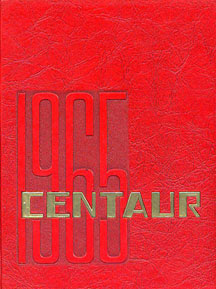 It's a darn shame.   The Class of '65 reunion is next weekend and I still have five untouched copies of the Centaur given to me by Jesse Morphew.  I had hoped someone on the committee would want them as door prizes, but they politely declined.  Any ideas? 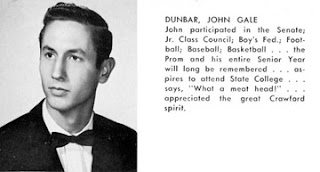 John Dunbar '64 died March 31, 2015 according to his daughter Amber Dunbar-Truehart 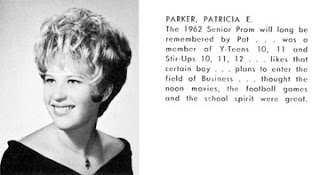 Kathy Houser Nolan sends word of the passing of her cousin Patricia Parker Headley '64, who did not survive her most recent bout with cancer.  Click HERE to sign the on-line Memory Book.

WHY AM I HAVING DREAMS about my babyhood in Florida and the year I spent in Guam?  Oh, maybe because it's unbelievably hot and muggy in Pacific Beach.  Well, the Waffle Spot is air-conditioned.  Nancy and I went last Fry Day and were excited to see that the lobby was finally open. Too bad it was a 35 minute wait to be seated.  We went next door to Albie's Steak and Eggs.  Last time this happened we didn't find parking until we reached Brother's Restaurant on Waring Road. 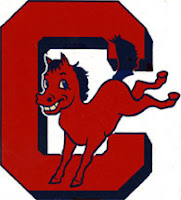 Susan Marshall Gordon is looking for convertibles for the Homecoming Game to be played Friday, October 16 at 6:30 PM vs Holtville.  Because Crawford's field is still under construction, the game will be played at Lincoln's (almost) new facility.  Call or text Susan at 619-865-3410 or click on her underlined name to email her. 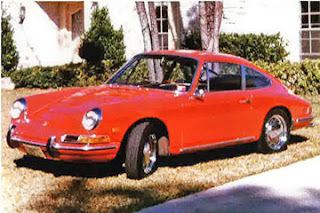 Speaking of snazzy cars, John Ramsey '60 has written an article entitled Three Porsches In My Life for 912 Registry Magazine. 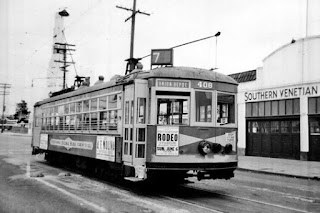 Greg May posted this photo to the Streetcars Album of his Vintage San Diego Facebook page.  He says it was taken June 1, 1948, which he may have deduced from the Rodeo advertisement on the front.  It's the #7 car headed west on University Avenue, leaving the Tower Bar and Euclid Avenue in its wake. 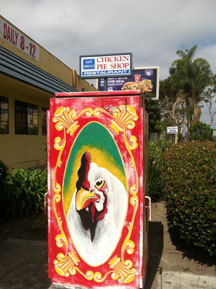 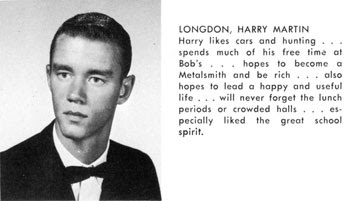 Services for Harry Longdon ’65 will be held at 3 pm Saturday, September 12th, in the chapel at City View Church, 8404 Phyllis Place, San Diego, CA 92123.  He succumbed to adult leukemia on August 26, 2015.  A celebration of his life will follow at the home of his long-time friend Rick Bonnett in Serra Mesa.   Click HERE to read the complete obituary.

Enjoy your Three Day Weekend.  I hope -- like me -- every day is a Weekend Day for you.  Wait a minute!! I spent all weekend folding, tabbing and labeling 485 copies of the September Alumni newsletter.  If you're a subscriber your copy is in the mail.  It features a cover article on singer/songwriter Stephen Bishop, a '69 graduate of Crawford.  Click HERE for information on how to subscribe. 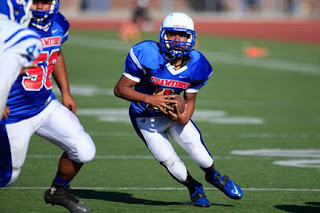 Classes don't start for another week, but the football season is underway and Crawford's already a winner. They thrashed Orange Glen High School last Friday in a game played at Hoover.  Click HERE to read all about it.  They play Classical Academy, another Escondido team, at Hoover today at 3:30. 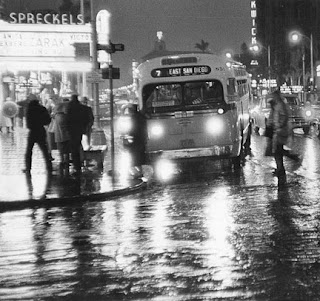 If I understand correctly, there are legions of Facebook fans who don't believe there ever was an East San Diego.  Ed Fazio, whom I don't know, posted this photo of the #7 bus in the rain on Broadway enroute to EAST SAN DIEGO. 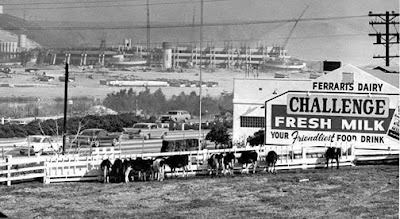 Facebook, on almost a daily basis, has new, old photos that excite me.  Greg May just added this photo of Farrari's Dairy and Jack Murphy stadium under construction to the Mission Valley Album of his Vintage San Diego Facebook page. 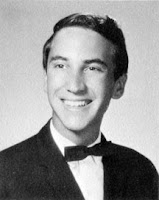 We already mentioned the passing of Randy Robbins '67, but the Union-Tribune has now published his obituary.  Click HERE to check it out.