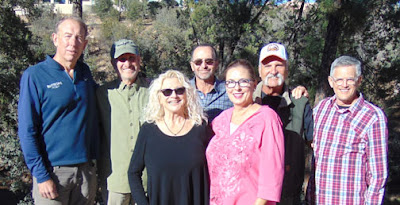 The Class of 1970 had a mini-reunion at Kris Pruski Wood's beautiful new home in Prescott, Arizona on Sunday, November 11th.  Front row: Jan Gasulla Lawton and Kris; Back row: Steve Hoke, Gary Gallerstein, Wayne Zucker, Craig Juleen, and Bernie Feldman.  Jan also lives in Prescott and Gary lives in nearby Sedona.  The rest of us haven't moved from San Diego yet, but were in Sedona visiting with Gary and doing some hiking over the long Veteran's Day weekend.  BTW, while hiking in Sedona Saturday we had an argument about whether our old friend and classmate Matt Leddick was the Marlboro Man or the Winston Man up on the billboards back in the '70s.  We located Matt's phone number from his Santa Ynez real estate agent website and surprised him with a speakerphone call right from the trail (which also included Butch Hiller, '71). Shockingly, it turns out Matt was the Winston Man! -- Wayne Zucker

Speaking of moving to Arizona, I stumbled on the fact that if I move to Peeples Valley, population 374, I could pick up a mobile home for $71,500 -- and my address would be on S John Fry Avenue!! 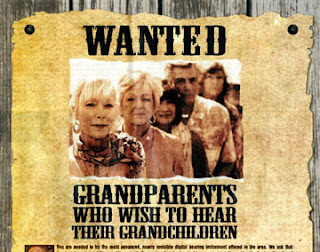 I'm going deaf -- and blind!!  I would have sworn this hearing aid ad in the Union-Tribune was for grandparents who wish to "fear" their grandchildren.  I don't have any grandchildren so I'm off the hook. 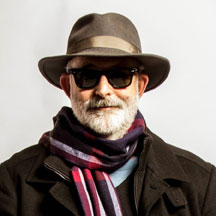 Jack Tempchin '65 is in the news again.  This time the man who penned "Peaceful Easy Feeling" for the Eagles, is going into the Songwriters Hall of Fame, along with Mariah Carey, Vince Gill and Cat Stevens.  Click HERE to read George Varga's article in the UT. 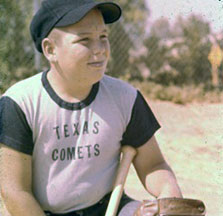 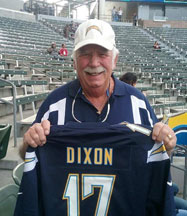 Ron Dixon sent compliments for last week's photos of him in Little League.  The ex-Charger Cannon Man also shared a photo taken of him at StubHub with his own Chargers jersey.   (I thought Philip Rivers wore #17) 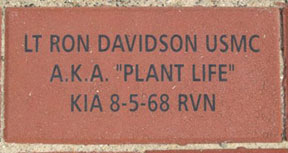 Last Sunday marked the 100th Anniversary of the end of WWI -- the War to End All Wars.  100 years ago seems ancient, but 50 years ago doesn't.  I meant to honor my buddy Ron Davidson last August 5th, 50 years after his death in Vietnam.  Some of you knew him as Coach Davidson at Horace Mann.   Click HERE to take another look at the page I have devoted to him. 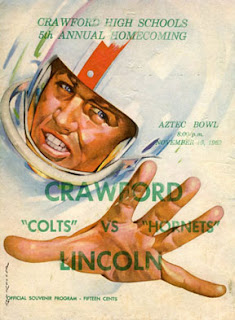 Crawford played Lincoln on this date in 1962.  They met at San Diego State, in Aztec Bowl, where Viejas Arena is today.  The game started at 8 PM.  I'm falling asleep in the Barcalounger these days at 8 PM.  Click HERE to take a look at the program. 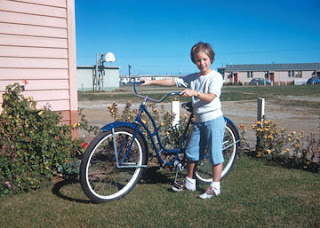 Who knew?  There is a digital archives on the SanDiego.gov site.  You can look at photos, videos, and listen to old City Council meetings.  I clicked on the Northbound 54th St video.  I don't think it is northbound.  I'm not even sure it's 54th, but it sure looks familiar.  Click HERE if you'd like to check it out.