I spent much of last weekend and Monday folding, labeling, and double-stickering 550 Crawford Alumni newsletters.  On Tuesday Nancy and I took them to the Midway Post Office.  If you're a subscriber you should have gotten yours in the mail.  It was a spectacular day so we drove out to the Cabrillo Monument before lunching at Good Time Charlie's with the Class of '63 Reunion Committee.  A good time was had by all.  There are still venues to be investigated, with October 2013  as a probable date. 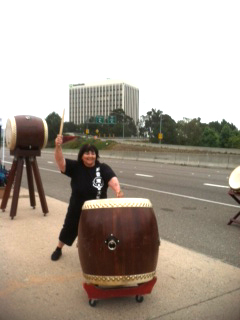 If you participated in the Rock 'n Roll Marathon, and thought you were having a near-death experience, that really WAS Lulu Anaya Bayless '63 on the 163 Freeway cheering you on while pounding on a Taiko drum.

Maureen Nepp Millman '64 says she's having a Senior Moment, or at least was having one when she couldn't recall if her prom was at El Cortez -- or somewhere else.  Thoughts? 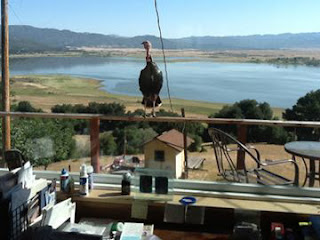 Adele Spirz Delgado '71reports in:  "I've lived just above Lake Henshaw, on Mesa Grande, since 1976. Those turkeys were introduced without input from the public many years ago.   When they first were sighted by locals we asked if they were drinking Wild Turkey when they saw them.  When it became apparent they really were here and fish and game asked for comment, they had already done too well to do anything about it.  They are a non-native species, taking the  Quail niche habitat.  They have stripped my grape vines, taken my peacocks away with them, mowed down the outfields, damaged vehicles unlucky enough to run into them but they are good on the BBQ -- just stuff with sage, rosemary, apples and enjoy."

"Are you a turtle?"  I guess not.  Someone said she was going to share the secret questions with me, but never got back to me. 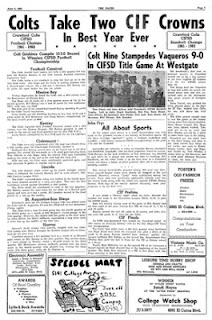 The party's over.  Here's the last Pacer for the Class of '62 Seniors, an 8-page extravaganza, published on June 4, 1962.  I've taken the liberty of showing my final page as Sports Editor above.   Click HERE to enjoy. 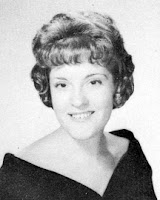 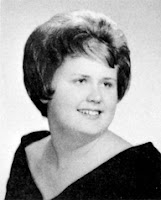 Janice Wilkerson Ziemann '63 passed away on May 29th due to complications from diabetes and kidney failure.  A few additional facts are available on the Class of '63 Obituary Page. 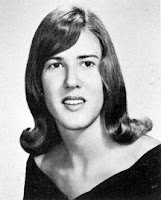 Susan Terdik Tippets '64 died on May 30th.  Sharrin Mass Miller '61 sent the sad tidings, noting that Susan and Sharon's husband discovered the Colt Connection when they worked together.