Have you tried Palmolive coffee?  It foams up a little like beer and results when you don't properly rinse your cup.  I poured mine back.

Subscribing to the quarterly newsletter were Robert “Hutch” Hutchinson ‘64 and Pam Johnson Chene ‘62.  Pam is living in Bosque Farms NM, where "Red and Green are chili choices and not Christmas colors".  Barbara Thompson Neal ‘70 has moved to Portland, Oregon to be closer to her new grandson. 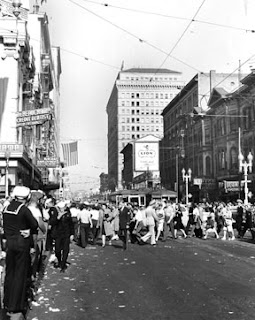 I got an email this week from a fellow who planned to attend the 90th birthday party of a woman who remembered celebrating VJ Day on Broadway in San Diego.  He wanted to know if I had a photo he could frame.  I fixed him up and figured I'd share it with my fellow Colts.  Howard Rozelle took the shot looking up Broadway from Fourth Avenue.  Click HERE if you'd like to take a look at an enlarged version. 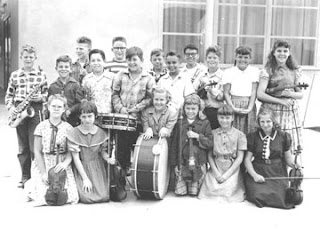 Steve McDaniel '61 shares photos of the 1954 Darnall Elementary School Orchestra (above) and what may be his first grade class photo from Darnall.  Click HERE to see them and see if you can help solve the mystery.

Steve also sent photos taken in November 1960 of himself and his cool 1950 Chevy.  Click HERE to learn more. 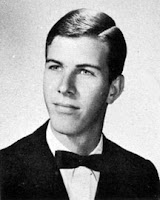 Rick Gross '64 passed away July 16th after many years of poor health.  You can read more about Rick on the Class of '64 Obituary Page  News of Rick's passing came from Mike Abbott '65.  He'd like to hear from you if you remember Rick.  Email him at mikeyptcruiser@yahoo.com or zcarman@hughes.net 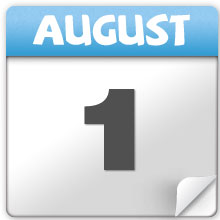 Remember the Simpsons’ episode where Hallmark was trying to come up with an August holiday that would allow them to sell more greeting cards?  OK maybe I made it up.  Anyway, I’m thinking that’s why Ron Klein hasn’t forwarded the usual Nancy Miljas artwork announcing the resumption of First Thursday at The Amigo Spot.  You could come at 6, but half the seats and appetizers would be gone.