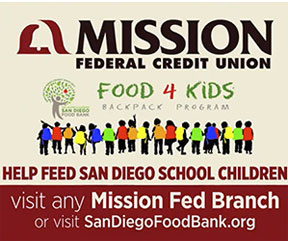 Every so often something appears on my TV screen that causes me to sit up in the Barcalounger and wonder if my eyes and ears were deceiving me.  Mission Federal Credit Union is helping to sponsor the Food 4 Kids Backpack Program.  Who better to "help feed San Diego School Children" than Mission Fed spokesperson -- wait for it -- Angie Lasagna!! 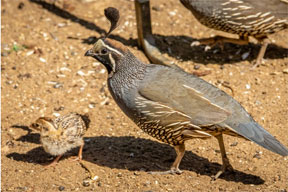 I don't promote ALL of the missives of my '62 classmate Ernie Cowan, but most all of them.  Last week's Outdoor column was the delightful "Nature's morning wake-up call on Mt. Whoville".  Click HERE and enjoy. 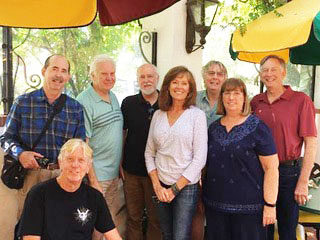 Last week George Sorenson sent me a photo of some folks from the Class of '69 who had all started out at San Diego State's Campus Lab School.  He also sent a lovely shot of their 1st Grade class in 1958.  I was able to blow up the 1958 class and place it on the School Days Page.  George was never able to locate the person who took the above photo and get a denser version.  If we do get one we'll blow it up and post it also.  Pictured above are:  Robby Wilcox, George Sorensen, Thomas Cook, Terry Potter, Doug Smith, Karen Dilworth, Phil Frye, with Keith Christensen seated in front. Terry Potter went on to be the Crawford Homecoming Queen and George Sorensen the Drum Major of the Marching Band.   George says you can pick them out in the photo below but he didn't say how. 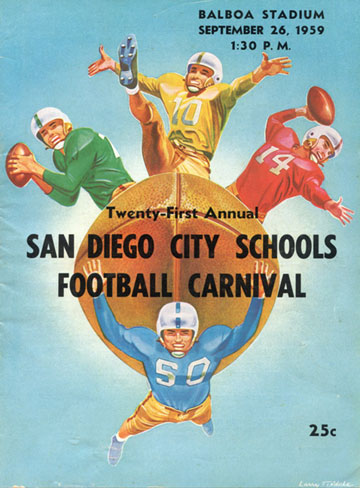 Well, it's been 60 years since the 21st Annual San Diego City Schools Football Carnival was played at Balboa Stadium on September 26, 1959.  Crawford was the host school for the event, and Vern Bowman got his portrait published, although most of his face was blocked out by the face guard on his helmet.  Click HERE to reminisce. 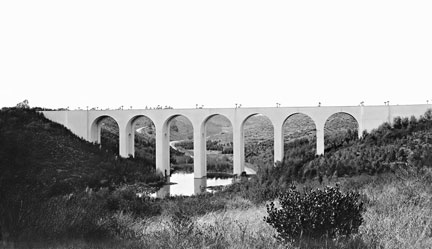 Without the California Tower as a reference it's hard to tell which way we're looking in this photo of the Cabrillo Bridge taken on July 18, 1915.  Click HERE to look at an enlargement and see what my guess is. 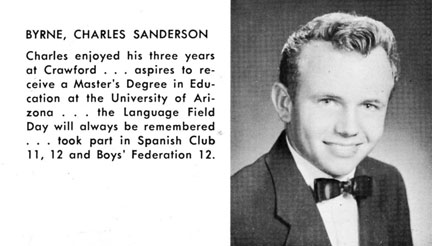 Charles Byrne ’62, passed away September 18, 2019 at his home in Carson City, NV.  Charlie, later known as Chuck, was born in San Diego and attended San Diego State’s Campus Lab School, Jackson Elementary, Horace Mann and Crawford.  He attended the University of Arizona for a year, married, then finished at San Diego State with a degree in Finance.  He worked for several corporations in the San Diego area in finance and accounting before moving to the Silicon Valley area for a number of years.  He then transferred to Carson City, NV in the 1990s where he was CFO, then President and CEO of Hytek Microsystems, Inc. before his retirement.  In his later years, he loved golf, fishing and chilling out at the family cottage on the rocky coast in the Redwoods north of Trinidad, CA.  Chuck is survived by his son Quentin and daughter Christine, both in Nevada, and his brother Mike ’64, of Hudson, MA.