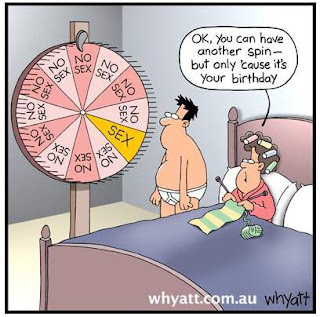 Why yes, I DID have a birthday this week.  Why do you ask? 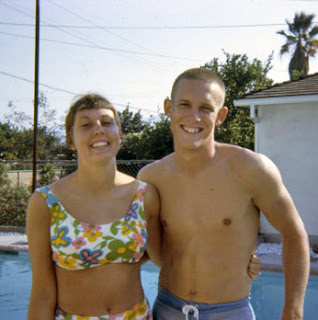 On September 28th Barbara Bush and Tom Cassie celebrated the 55th anniversary OF THEIR FIRST DATE.  Says Barbara, "Thank you Tom for asking me out on our first date. We had a great time at the SDSU football game and pizza afterwards at Pernicanos.  My new shoes hurt, so I took them off, unbeknownst to you. When it was time to go, I couldn’t find them. That was the first red flag, but I’m so glad you ignored it and the all the others that followed." 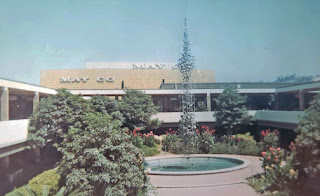 Philip Hill shares a photo of Mission Valley Center's courtyard, looking east to May Company, that he took in July 1966.  "When the Center originally opened," he recalls, "I worked my first job at Thrifty Drug Store's Ice Cream counter on the West side of the mall next to Montgomery Ward's. I'm thinking that might have been during the summer after my '61 Crawford graduation." 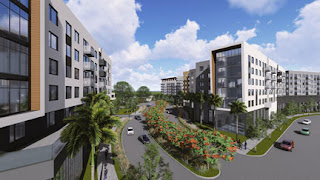 Did you ever have the Chateubriand for Two at Kelly's Steak House in Mission Valley?  Me neither, but I must have seen the sign a thousand times driving on the freeway.  I swear it was $3.95 the first time I saw it, but I'm sure I was wrong.  What does this have to do with anything?  Much of the Town and Country Hotel, including the old steakhouse, will be dozed in the not-too-distant future and the above image is a rendering of what it will look like.   I no longer recognize much of downtown, and Mission Valley is soon to follow.  Click HERE if you'd like to read the article in the U-T. 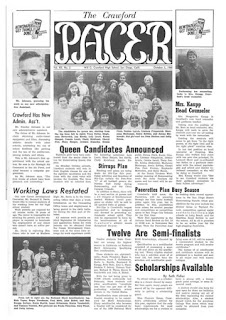 Click HERE if you'd like to read the 6-page Golden Anniversary edition of the Crawford Pacer, issued on October 3, 1968.

Earlier this week I mentioned the services being held for Marty Fischbein today at the East Lake Shores Beach Club at 11 AM in Chula Vista.  Alan Jay Weissman recalls his classmate and friend.

Marty and I grew up in the same neighborhood near SDSU, where we both attended Hardy Elementary School, Horace Mann Junior High, and Crawford High School together.  Marty was a great friend, and I have many wonderful memories of our time together.  As children, we formed our own Beatles tribute band, where I was Paul, David Drexler John, Ron Lieberman George, and Marty was Ringo. The first all Jewish Tribute Band, I would joke later.  We all feigned playing the instruments, replacing the guitars with badminton racquets, and Marty feverishly beating on a bread basket with two pencils as drum sticks.  As kids, Marty and I did a lot of fun stuff together.  Whether it was playing football in the street, or crawling through the sewer across the freeway to Adobe Falls to catch pollywogs, Marty was always there.  Marty was kinda famous too when we were kids, as his uncle was Mr. Dependable.  Some of you may remember him, as he owned an appliance store and had a well known commercial on TV, where he would say, ''Hi, my name is Mr. Dependable, and if you can find it for less, I'll refund the difference.''  Marty never liked that commercial much, but all of his friends sure did.  Marty was always an adventurous child, as well as a teenager.  We spent a lot of time at the Jewish Community Center, where we would get into trouble from time to time.  One time in particular, we told our parents that we were at the JCC, when we were actually at 'The Western White House'' in San Clemente, holding picket signs, and DEMANDING that President Nixon help in our efforts to have restrictions eased, so Russian Jews could emigrate to Israel or The United States.  My father asked me the next day, ''Did you and Marty have a good time last night at the JCC?''  “Yeah sure dad, why?'', I replied.   With a look to kill he showed me the photograph of Marty and I in the San Diego Union, screaming and yelling so loud that Ron Nessen (Nixon’s Press Secretary) had to come over to us and say, ''The President will look into it''.  We were so proud of ourselves, and -- as angry as our parents were at us for lying about where we were that night -- they were very proud of us too.  We also went to our very first X-rated movie together in downtown San Diego, as we saw ''The Last Tango in Paris''.  I remember Marty being disappointed in it, and saying to me ''Really, is that it? That movie should have been rated R'', and we laughed and laughed.  Over the years Marty and I had lost touch a bit, but he has never been far from my heart, or my mind.  I have told many stories about our time together as friends in those years, and the stories will continue to be told, as I truly loved Marty Fischbein. Rest in Peace my brother, Rest in Peace -- Alan Jay Weissman ’74