I, too, had Miss Dirksmeier and Ms. MacMaster.  I retained the Pater Noster, the first lines of Gaudeamus Igatur [song] in Latin and a fondness for word roots -- Shirley Kanter Ginzburg  '65

I had Ms. Dirksmeier in first year Latin at Horace Mann. That would have been 1958, I think.   Amo, amas, amat.  Guadeamus Igitur. The only things I remember.  I know that those years in Latin class were the perfect prelude for my job in the Air Force.  I became a linguist (not my choice). My language was not Latin, but Mandarin. I was an Intelligence Officer.  Thank you Ms Dirksmeier -- Dana Carr ’64

Miss Dirksmeier was my 9th grade English teacher.  Even after getting a BA in Journalism from SDSC in 1965, I still credit her for teaching most of what I know about grammar and sentence structure.  Amazing, though tough, teacher.  I lot of kids didn't like her strict demeanor, but I just learned from her -- Jim Schrupp '61 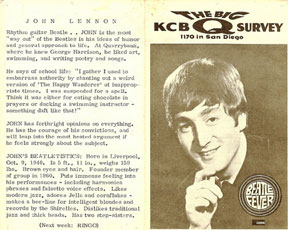 John Lennon was the featured Beatle in the March 29, 1964 KCBQ Big Q Survey and the Fab Five still had the top five songs.  Click HERE to see who else hat hits that week. Jeff Schriebman and Al Miller were the two Colts in the Royalites, who played in San Diego from 1963-1967.  Jeff posted this photo on Facebook, but hasn't responded to my emails, so I don't know which one he is -- and I don't have an Al Miller in my CHS database. 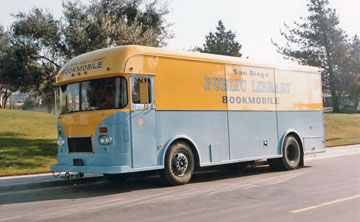 Remember the Bookmobiles?  This photo popped up on Facebook this week, along with a little history of the mobile libraries by Richard Crawford.  Click HERE to check it out. 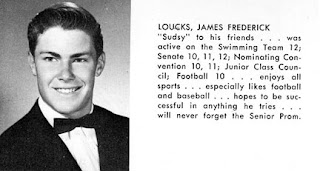 Dan Burton sends word of the passing of Jimmie Loucks '65 on March 18, 2019.  After high school Jimmy moved to Colorado where he became a skilled cross country skier, downhill skier, and back country aficionado. He loved the desert, the ocean, the rivers of the western United States, and the mountains of California, Colorado, and Baja California. He coursed the Colorado and San Juan Rivers in Arizona and Colorado, and fished the sea off the coasts of California and Alaska. Jimmy could sing!  He had an amazing voice and could imitate countless artists. His ear was so good he could listen to hawks calling one another and then imitate it so well he could call to them and they would swoop by to see him. He had a green thumb and had stunning gardens wherever he lived. His sense of humor was the greatest. He is survived by, among others, his brother David Loucks of Encinitas and his sister Kathie Loucks Blackburn of Ceres, California,
Posted by John Fry at 6:28 AM No comments: