IT’S STILL DARK IN PACIFIC BEACH, but that’s OK because it stays light late now!!  Nancy and I will try to breakfast at Green Flash.  It will soon be changing hands.  They claim their won’t be big changes, but I’m always suspicious.  China Inn, my favorite Chinese restaurant, lost its lease, and will be closing next week.  Not a good month for little Johnnie Fry.

Spring arrived yesterday at 9:57 AM PDT and not a moment too soon.  San Diegans were fearful of having to suffer through another one of those 85 degree Winter Weekends we had weekend before last.

Remember last July 4th when the Colt Corral blog talked about Twinkies, the drive-in movies, and exactly what years the Sears store existed in Hillcrest. Click HERE to revisit that conversation and check out two photos of Sears from Paul M Bowers.

A growing number of Colts are accessing the Colt Corral via Facebook.  At least three folks asked to join the Crawford Colt Corral this week and may not have been successful.  I pushed the button on my end, but weird things happened and I’m not sure those people had a success experience. 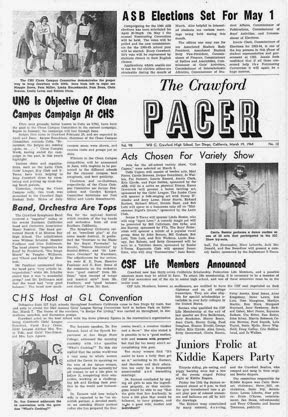 Gerritt Hollman and Tetsuo Tajima were the featured Senior Sketches in the March 19, 1964 Golden Anniversary Pacer, while Gary Phillips was the March Athlete of the Month.  There’s lots more to read in this 6-page edition of the student newspaper.  Click HERE to check it out.
Posted by John Fry at 12:58 PM No comments: