I’M THINKING OF MY YOUTH IN GUAM this morning.  I suspect it’s dark, hot and humid there too.  Nancy and I will be taking the Class of ‘60 newsletter renewal envelopes to the Midway Post Office this morning, so there’s a good chance will end up brunching at the Waffle Spot. In June 1966 I graduated from SDSC and moved to College Village Apartments where I met Jeff Dalymple.  It didn’t take long for a friendship to form and, thanks to Red Mountain wine and a cheap Tijuana guitar, it was soon Kumbaya time around Apartment #4.  One of the songs that Jeff sang, began “Oh, to be a gay Hawaiian beach boy, like the ones I knew at Waikiki.”  This was back when gay still simply meant happy.  I’ll get back to that.  It wasn’t long until Jeff was hired to play drums for Sounds of ‘66, a group hired to play behind the hypnotist Dr. Michael Dean at the Catamaran Hotel.  The group included George Fogelman ‘63 and Doug Kvandal ‘66.  Jeff, George and Doug are now part of Live Jazz, appearing Saturday nights at the Amigo Spot.  ANYWAY, neither Jeff nor I can remember the rest of the works to the Hawaiian Beach Boy song.  We thought if we typed “Gay Hawaiian Beach Boy” into Google we might get lucky.  Actually, there was ample opportunity to get lucky -- but no lyrics to the song we wanted. 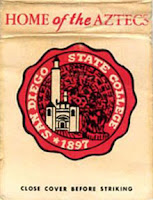 Speaking of San Diego State College, a flattened SDSC matchbook cover fell out of a file folder this week and I thought you might like to see it.  Click HERE to see all three panels enlarged. 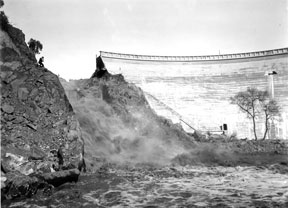 Have you missed your San Diego History photo?  Here's a shot taken by Lee Passmore on September 30, 1916.  I assume you know the story.  If not click HERE. 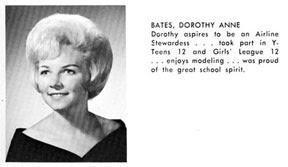 I’m trying to locate Dorothy Bates ‘65.  Apparently she achieved her Senior Goal to become an Airline Stewardess, and one of her old PSA pals is trying to find her.  Let me know if you can help.  If you know of siblings, that might be a place to start. 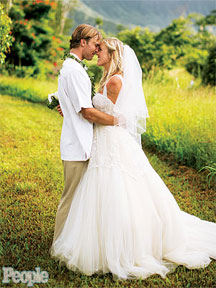 Cheri Lynch Hamilton '71 sends word that her daughter Bethany is now a bride.  Mark Silver '69 had already forwarded a link from People Magazine.  Click HERE to check it out

The First Thursday of next month is
September 5th.  Hope to see you there 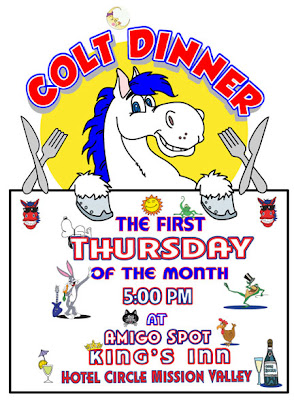 Nelson Moore '61 lives in Harbison Canyon and is helping with the Class of '63 reunion.  He thought he'd have some stuff ready for me to look at so I said Nancy and I would meet him for breakfast at Janet's Montana Cafe in Alpine.  Nancy's schedule changed so Nellie decided to meet with some other '63 folks in Escondido.  Nancy will be leaving Escondido about that time, and . . . oh, I don't think I'm gonna be able to make this work. 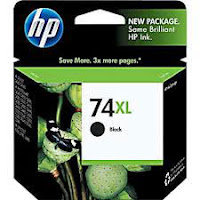 I've just uncovered an unopened HP 74 XL black and white ink cartridge in my desk drawer.  The printer it was destined for died and went to printer heaven a couple of months ago.  Staples is selling them for $41.99 so it seems a shame to toss it out.  I'll entertain offers from interested parties.  Think Starbucks gift cards or a hand-delivered Taquito Platter from Roberto's. 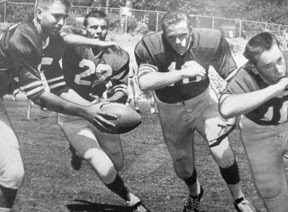 A whole buncha guys -- and Lynn Routt Swanson -- said Doug Helzer's football picture was taken at a photo session.  A game, or even practice, would have required helmets.  Shows what I know. 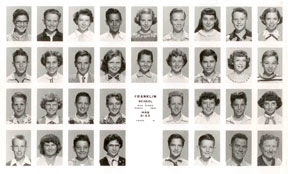 Franklin Elementary School is at Monroe and Copeland.  Kids who lived in Kensington and attended Franklin went on to Wilson Junior High and Hoover.  Elizabeth Holmes Klugh '61 didn't live in Kensington -- and went on to Horace Mann and Crawford.  Click HERE to see enlargements of her Sixth Grade photo and another that's either First, Second or Third. 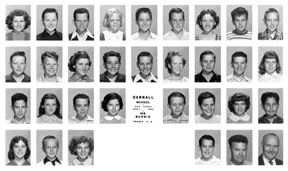 It took awhile, and Steve McDaniel '61 had to drive to Pacific Beach from Carlsbad, but we've scanned and posted his 5th and 6th Grade photos from Darnall Elementary.  Click HERE to see the finished product.

Robert K. Rice passed away July 25th at Collwood Terrace.  The father of Sally '74, Barbara, Joyce and Jean -- all '76 -- Bob served as principal at Oak Park Elementary, among others.  Click HERE to sign the Guest Book.  Click HERE to visit his Memorial Web Site.

I RECEIVED A NEWSLETTER SUBSCRIPTION renewal check yesterday with a note attached -- "I miss your Fry Day weather reports".  Seriously?  Well, here goes.  It's pitch black in PB but supposed to be spectacular.  Normally it wouldn't matter 'cause I'd be in the house on the computer, but Nancy's down from Escondido so we'll be out and about.

I was sad to hear of the passing of Mr Tice who was my 5th grade teacher at Darnall.  He taught us to memorize the alphabet backwards which I can recite to this day.  RIP -- Terri Quinlivan Parham '66

What a surprise to see the Wolf Motors photo of the VW giveaway.  That’s my father -- John Dormier -- in the Douglas Oil uniform on the right.  I remember that give away and there was also a Cadillac that was won from his service station in the 1960s.  My dad passed away in 1974 from Lou Gehrig's Disease (ALS).   Thanks for the post -- Sheila Dormier ’64 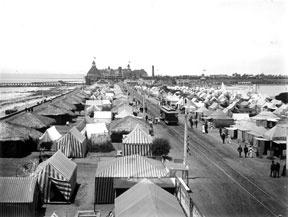 Boy, you can almost hear a player piano in the background.  Here's a 1904 shot of Tent City in Coronado with the Hotel Del in the distance.  Click HERE to see an 8 x 10 view. 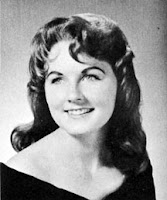 Services for Toni Dungey Cattell '60, wife of Charles Cattell '60, will be held today at 11 AM at Queen of Angels Roman Catholic Church in Alpine.  Viewing will be available prior to the service and a reception will be held afterward.  Click HERE to go to the Class of '60 Obituary Page. 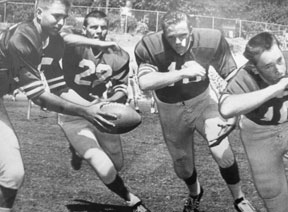 Doug Helzer '63 (#22) shares a photo of a 1962 football game -- or possibly a practice -- where Dennis Rubin hands him the ball as Dave Duncan and Bill Sanders block.  Click HERE to see a much larger version.  Click HERE to visit the Sports Page and look at some other photos. 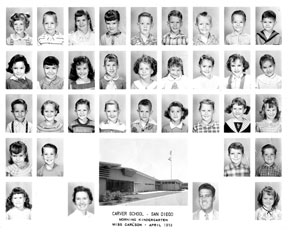 Barbara Alvarez '70 forwards her Kindergarten and First Grade class photos from George Washington Carver Elementary School.  Click HERE to check them out -- and to read what she had to say.

Good News!!  Patty Bremner Brubaker '72 has agreed to be the Musical Director at my funeral, hereinafter referred to as the 1st Annual John Fry Celebration of Life and Craft Beer Festival.  Patty has a banjo player and an accordionist, and has a lead on a bagpiper.  I'm excited!  I don't want to miss what's shaping up to be a great party, so I'm looking at a date in the not too distant future. 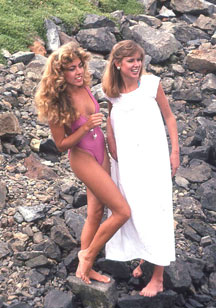 You know you're getting old when your former model -- Anna (long an American Airlines flight attendant) -- asks you to take photos of her now-grown daughter.  I told her I quit taking photos when the battery in my camera died.  And I can't find film anymore.  And I'm lazy.  Boy, the party is REALLY over when you turn down a cheesecake gig.  That's Anna on the left by the way. 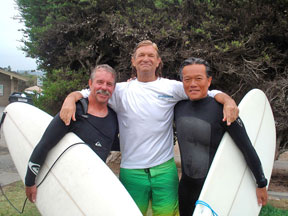 Thanks to Facebook, Crawford surfers Dave Smith '74 and Ken Burton '72 got together after 40 years -- and Steve Kwik '76 got invited too.  Click HERE to get a close up look. 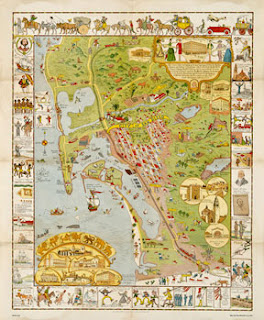 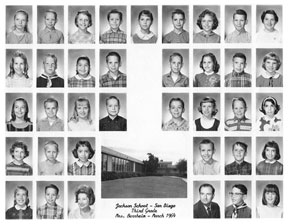 George Glover '73 shares his Jackson Elementary Third Grade photo.  He said he can provide names, also.  Click HERE to take your own look.

Doesn't look like I'm gonna get that big a turnout for my funeral.  I haven't picked a date or a venue, but my musical desires got a thumbs down from the Amigo Spot Live Jazz band.  I told them I wanted only accordion, banjos, and bagpipes.  Oh, I'm perfectly healthy (I think), but constantly reading of the passing of folks younger than me has got me contemplating my own mortality.  Cheers!!!

Doug Helzer checks in from the State of Texas and is now on the '63 Email Page.  Maria Banos Carroll says she's back in La Mesa.  I've placed her on the '64 Email Page. 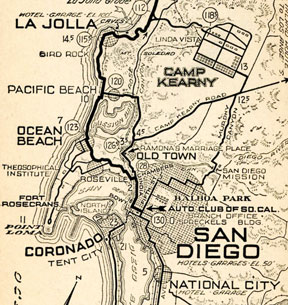 I've added Auto Club Strip Maps 12 and 80 to the web site.  I'm gonna wait to hear from Dick Cloward before I add captions.  Willie Skinner loaned them for copying and they appear to be of World War One vintage.  Click HERE -- and scroll to the bottom of the page -- to see them in all their glory. 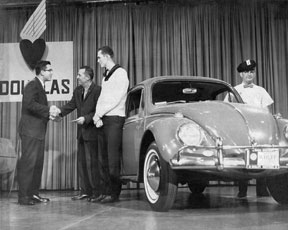 Do you remember Wolf Motors, Douglas Gasoline or KFSD-TV?  Owen Western '63 forwards a great publicity still of he and his dad accepting the keys to a 1964 Volkswagen.  Click HERE to see the photo enlarged and to get the details about this lucky event. 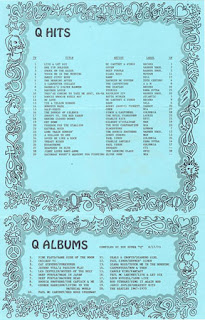 Here's the KCBQ "Top 29" list from August 17, 1973 -- 40 years ago.  Interesting that the Beatles have a hit song and so does Paul McCartney and Wings.  Click HERE to look at a larger image that isn't that much easier to read.

Phillis Dudick and Kathy Tonsky Clyman have arranged a Remembrance for Myra Segal on Wednesday, August 7, at 12:30 at the Culver City Senior Center, 4095 Overland Blvd.  Phillis suggests you go to segalremembrance@gmail.com for comments and further information. 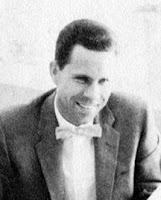 Two Horace Mann faculty members appeared in the the U-T obits last week.  Phil Petersen was Boys' Vice Principal during my time as a Cougar.  I recall that he was a Weekend Warrior who flew Corsairs out of Los Alamitos Naval Air Station.  I may have gotten called into his office, but the memory is hazy.  Something to do with shocking people with a Model T coil.  I'm pretty sure it was all Wayne Brickey's fault. I've placed the Horace Mann obituaries at the bottom of the Faculty Obituary Page. 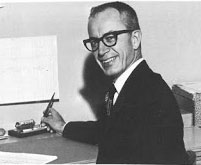 Mary Ellen Cain '71 called my attention to the passing of Horace Mann faculty member Donald Tice. Mary Ellen shared some nice memories, which you can read on the Faculty Obituary Page.