Despite last week's 34-21 loss to El Cajon Valley High School, Crawford remains atop the Central League standings with a 3-1 record.  Monte Vista will square off against the Colts today at 4 PM.  I believe the venue is Hoover High School, which is where we played our home games half a century ago. 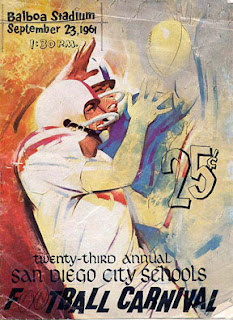 Remember when the prep football season kicked off with a Football Carnival in Balboa Stadium?Click HERE to view the program from the carnival held September 23, 1961 -- 55 years ago.

Click HERE to watch Dick Draz' speech at the 2016 San Diego County Sports Officials Hall of Fame Induction Ceremony.  He's introduced by local sports announcing legend Bob Chandler.  A lot of people told me Coach Draz was their favorite teacher at Crawford.  One, however, compared him to the Devil Incarnate and another to a Nazi War Criminal.  I guess everyone doesn't react well to being screamed at while wearing a Speedo.  I made me think about my favorite student at Hale Junior High. She showed up one day wearing her new braces.  I told her she looked like a '57 Buick, which -- to me -- was high praise.  Turns out teenage girls are very sensitive about their physical appearance. Who knew?

Phyllis Schwartz' question about Debbie Soper appearing in the '72 Centaur as both a Junior and a Senior took Sharon Cramer Sceper '68 back to her days on the Pershing Junior High annual staff. Recalls Sharon, "By some very careful cutting, splicing and taping, I put the head and upper body picture of an insufferable know-it-all jerk guy sitting at the conference table. Below the table line are the skirt and daintily crossed legs of a girl, who only I know to be Irma DeGroot '68.  It passed by our advisor's careful scrutiny and editing, and went to press as is!" 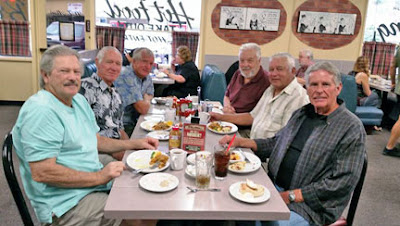 "One of San Diego County’s most delightful and colorful birds is the lesser goldfinch," says Ernie Cowan '62.  Click HERE to read the entire article published in last Saturday's Union-Tribune 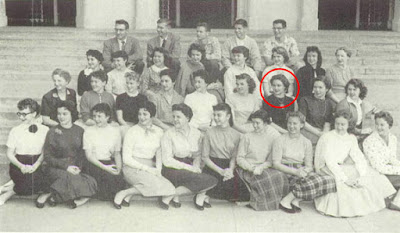 AMAZING what you can find on the web.  Last week we pondered the Crawford obituary for Carole Naish, born in 1938.  I was of the opinion she might have gone to Hoover.  Bob Richardson, using Ancestry.com I think, found Carole on the Prom Committee in the 1956 Hoover yearbook.   Bob says the color photo above was taken from the Southern Methodist University yearbook. 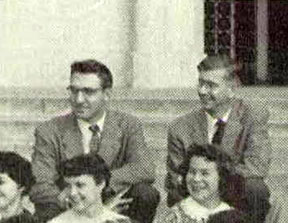 In the back row of the group photo are two of Bob's favorite teachers at Crawford -- Mr. James Gibbs and Mr. Lavier Lokke.