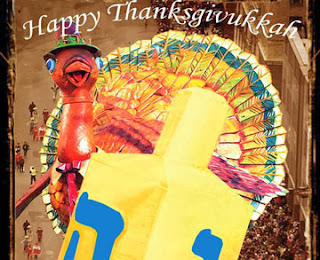 Hope your Thursday is the greatest.  The Wingo Women and I will be dining — guest where? -- at the Amigo Spot.  They’re like family to us.

Speaking of giving thanks, Susan Kirk ‘68 says brother Ray came through 12 hours of surgery last Friday cancer free.  She thanks all of you who sent good thoughts and prayers.

I sent out an email to the Class of ‘75 this week asking if they knew the whereabouts of Nina Hutchuk.
I received an email from Gary Hutchuk, who hails from Canada, hoping I could put him in touch as he is working on the family genealogy.  Turns out Nina Hutchuk is really Nina KUTCHUK, but was listed as Hutchuk in the ‘75 Centaur.  Gary’s out of luck, but I still don’t know where Nina Kutchuk is.

Phil Petersen, who is listed as Philip Peterson, also in the ‘75 yearbook, is now on the ‘75 Email Page.
And he is no relation to the late Horace Mann Vice Principal Phil Petersen. 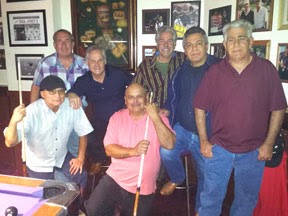 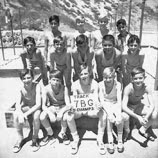 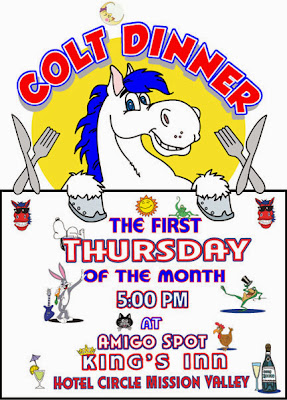 You can enjoy the Fry Day emails on your tablet or smart phone using Facebook.  Search for Crawford Colt Corral.

NANCY AND I GOT STOOD UP two weeks ago when we traveled north to San Marcos to meet with the folks where autistic daughter Lisa works.  We still got to eat at Fish House Vera Cruz however.  We’re headed north again today, but this time I’m holding out for George’s Burgers.

Checking in from Brookings, Oregon is Bill Fares ‘62.  Mary Margaret “Molly” Lee Richmond ‘66 says hello from Reno, Nevada.  They are both on their respective email pages.

Susan Kirk ‘68 hopes you will think good thoughts for her brother Ray Kirk, also Class of ‘68, who is undergoing esophageal cancer surgery perhaps as we speak.

Phillis Dudick is still hoping to find Florine Weiner, her best pal from Class of '60.  The quest has baffled Mary Gale "Sherlock" Rogers.  Can you help?

Debbie Nichols Poulos '63 lives in Davis, California.  She would like to hear from old friends.

It’s not a joke.  The high school football playoffs are underway and Division V Crawford will be part of it.  The undefeated Colts meet the Palo Verde Valley Yellowjackets tonight at 7 PM at San Diego High.  I believe Palo Verde Valley is near Blythe. 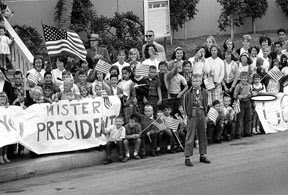 Yesterday’s U-T had a nice look back at President Kennedy’s visit to San Diego on June 6, 1963.  It also had a slide show of photos I hadn’t seen before, including the one above featuring students from Blessed Sacrament.  Click HERE to read the article.  Click HERE to look at the slide show.   In the meantime you might want to revisit the links to JFK’s visit to San Diego on June 6, 1963. 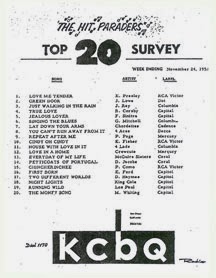 I guess it should come as no surprise that Elvis Presley is the new kid on the block on the KCBQ Top 20 Hit Paraders survey for November 24, 1956.  Click HERE for a copy large enough to read. Carlynne Harvey Allbee graduated from Grossmont in 1965, but still has fond memories of Montezuma Elementary.  She’s started a Montezuma page on Facebook and I’ve refreshed the Montezuma link on the School Days Page.   Oh, this is 6th Grade Graduation in 1956, contributed by Frank Welch, who also ended up at a high school not named Crawford. 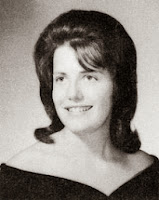 Folks working on the Class of ‘63 Reunion Memory Book asked if I knew anything about the passing of Yvette Muriel Vires.  I turned immediately to Mary Gale Rogers, whose research turned up only the fact that Muriel died on May 13, 1990 in Washington County, Oregon.  I’ve posted her photo on the Class of ‘63 Obituary Page.

GEE, IT’S ALMOST WARM IN PACIFIC BEACH and still dark.  I suspect Nancy and I will have a late breakfast at the Waffle Spot then — who knows? 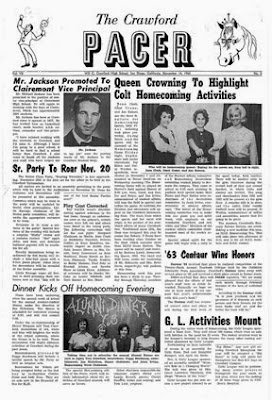 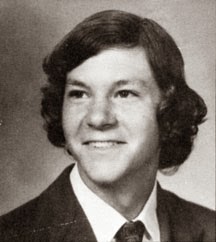 Ken Unitt ‘76 passed away suddenly on October 29th at home in Estes Park, CO.  A celebration of his life will be held at Rocky Mountain National Park’s Beaver Meadows Visitor Center on Monday, November 18 at 10 a.m.  You can read more about his life in the National Park Service on the Class of ‘76 Obituary Page.

MY IPHONE SAYS IT'S 54 IN PB and should level out at a nice 72.  Nancy and I will head up the coast for an 11 AM appointment at Rex Industries for the annual progress review of autistic daughter Lisa.  I've got my fingers crossed it will be followed by lunch at Fish House Vera Cruz in Carlsbad, although I guess there's also one nearby in San Marcos. I just learned there’s a golf tournament scheduled for Monday, November 25th in Rancho Bernardo, to benefit the Crawford Foundation and the Crawford Athletic Department.  You need to reserve your spot by Monday, November 11th.  For more information, please contact Darcel Glover, Crawford Athletic Director, at 619-583-2500 x4607 or via email at dglover@sandi.net   Click HERE to go to the web site. 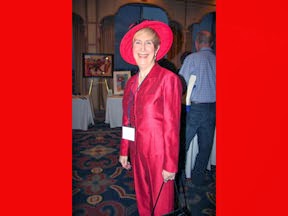 Carole Shannohoff Wolanow invites you to view three Picasa slide shows from the Class of ‘63 Reunion, featuring the photographs of Barbara Strange McClue’s husband Sid.  Friday Night #1, Friday Night #2 and Saturday Night  You're on your own as far as names are concerned, although I am available for a small consultation fee.

BRRR -- IT'S 52 DEGREES AT THE BEACH, but it's suppose to warm up so I guess I can peel off my layers like a homeless person as the day goes on. 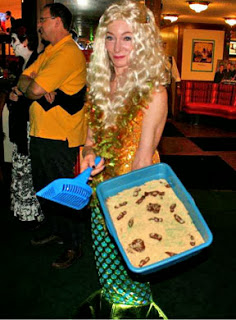 If you didn’t show up at the Amigo Spot last Saturday you missed seeing Stephanie dressed as a mermaid.  She looked ever so much like Peg Bundy in her attempts to walk.  By the way, she’s showing off her Kitty Litter Cake.  Just between you and me, I prefer German Chocolate. 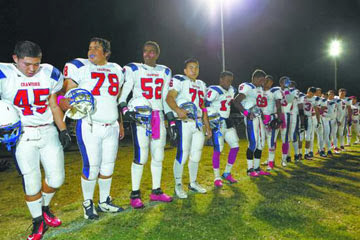 I don’t know if I mentioned that the first football game under the lights, the last game on the old field AND Homecoming on October 18th was cancelled when Calipatria called at the last minute and said they couldn’t make it.  All’s well that ends well, however!!  The game was rescheduled for the 25th and the Colts won their 8th straight game.  Bill and Chuck Rainey were among the alums in the crowd.  It all warranted a nice piece in last Saturday’s U-T, which you can read if you click HERE. 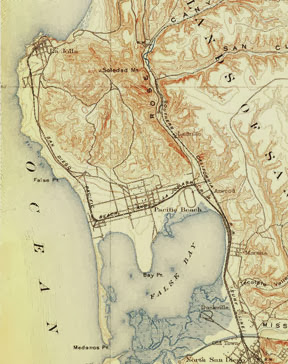 I acquired an email copy this week of the 1903 USGS La Jolla Quadrangle map and thought I’d share the part showing Pacific Beach.  In 1903 Duckville was in the south east corner of False Bay, the San Diego, Pacific Beach and La Jolla Railway AND the California Southern Railroad had tracks running up the east side of the bay, and the American Driving Park horse racing track still existed in east Pacific Beach.  Click HERE for the enlarged version. 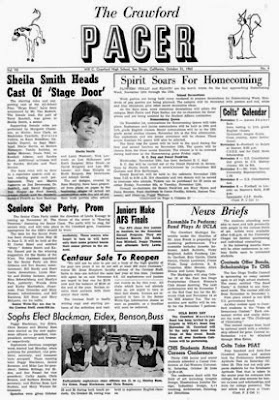 Greg Birch and Evy Balderman were the Senior Sketches in the Golden Anniversary Pacer published October 31, 1963.  Ironically, I didn’t spot any Halloween articles.  Click HERE to read all six pages. 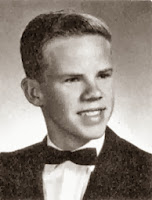 I received a call from Chris Bonwell this week and she shared details of the passing of Phil earlier this week.  He and a neighbor had been working in the back yard.  They called it a day, got cleaned up and were enjoying cold beers on the patio when Phil suffered a fatal brain aneurism.  She told me of a Memorial Website for Phil and I’ve added it to the Class of ‘66 Obituary Page.