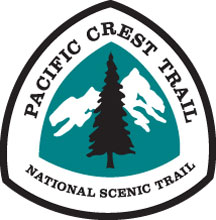 My husband Jim Metts (SD High, '59) and I just completed hiking the 2650 mile Pacific Crest Trail in the Oregon section (still have Washington to do!)  But while on the Trail with the 20 and 30 year old through-hikers, I got to wondering if any Crawford alums have done the Trail, or sections of it.  We were clearly the oldest people on the Trail.  Ernie Cowan (Crawford alum and a friend of ours from the Sheriff's Dept. Search & Rescue Team) wrote about the Trail in the August 5th Union-Tribune -- Cathy Kelley Metts ‘61 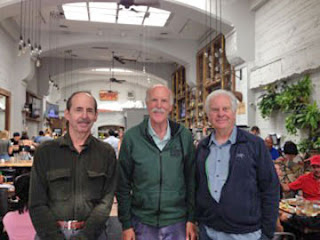 Last Saturday three kids who met at nursery school at Campus Laboratory School met for brunch.  A top of conversation was, of course, why doesn’t our friend John who sends out the Fried Egg Crawford email devote thousands of more words and images to CLS?  In hopes of nudging this along, I’m sending a reunion photo of we three at a swank, trendy, and funky Palo Alto bistro last Saturday.  We are left to right: Robby Wilcox who retired from being a deputy sheriff in Colorado and decades with the Boston Aquarium, and is now living in Palo Alto. David Wade who did his first year at Crawford then moved to Palos Verdes High School when his dad, who worked at General Dynamics, moved his job up to LA. Dave is into super computers. And, George Sorensen, who is a senior technical writer with Nike in Oregon. We three went to school together from nursery, through CLS, then Horace Mann, and Crawford. Robby (who of course goes by Rob now) and George continued all the way through SDSU.  Hadn’t seen Robby since about 1973 until we met for a little lunch. 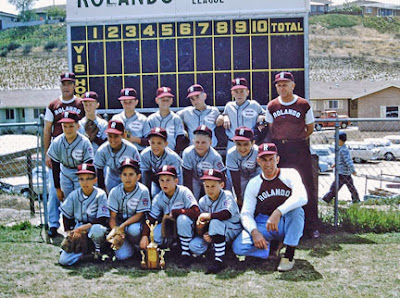 Here are some more great color shots of the San Diego of our youth that Greg Mays posted on his Vintage San Diego Facebook page last week. 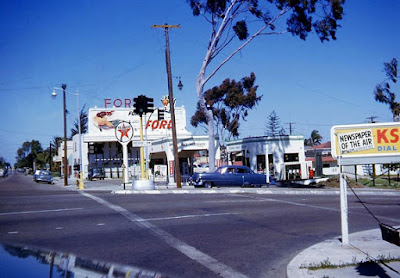 Here's a photo of Art Huebner's Texaco Station on the northeast corner of Park Blvd and El Cajon.  I LOVE the "State College 6" sign posted on the traffic signal, and the KSON "Newspaper of the Air" advertisement on the right.  Click HERE -- and wait patiently -- to see the photo enlarged on Facebook. 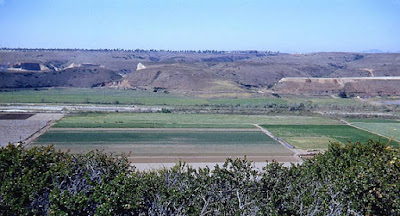 This photo shows a Mission Valley so pastoral I can't tell where it was taken.  I suspect it's looking north, with 395 at the left.  Click HERE -- and wait patiently -- to see the photo enlarged on Facebook. 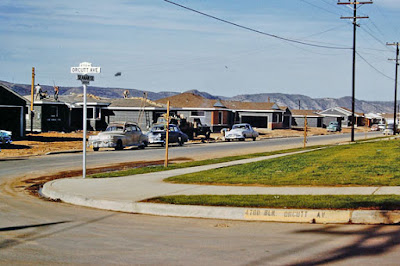 This could be anywhere in the USA, but it's not.  It's the corner of Orcutt Avenue and Seaman Street in Allied Gardens.  This was part of a series of photos on Facebook.  Click HERE -- and wait patiently -- to look at them all.

Marc Friedman ’61 passed away August 13th at a local San Diego hospital.  Marc suffered a stroke approximately six weeks ago and never recovered.  His daughter called to let me know.   We were very good friends since we were kids and used to ride our bicycles over to each others house.  He lived two blocks from the old Pep Boys tire store at 30th and University and I lived on Bancroft St in the Normal Heights area and we rode our bikes to each others house frequently.  We lost contact after we graduated from Crawford and never saw each other again until our 50th reunion.  We developed our friendship again and stayed in touch.  The last three years Marc had been coming to visit us here in Montana for a week or so and was going to return this year until he let me know he couldn't this year because of his stroke.  Marc lost his wife a few years back and had been living in the Lemon Grove area.  Marc was an avid swimmer in high school.  One of Marc’s major accomplishments was when he tried out for the United States Olympic Swim Team.  Although he didn't make it, he placed high.  His daughter Shannon said she would let me know if and when his services will be held which I will forward on to you.  He was a great friend and will be missed. -- Don Greeno '61