I LOVE this cartoon and plan to run it each and every Easter. 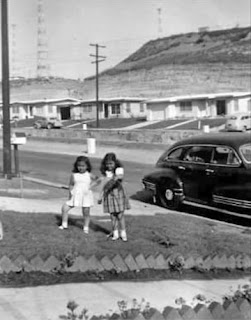 Robert Corio shared on Facebook this photo of his sisters Judy and Jane in front of the family home on Streamview.  I'm guessing it was in the '50s. 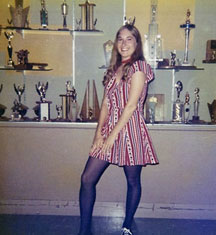 Where was Crawford's Trophy Case?

I thought it was in the library -- Pam Burroughs '63

As I remember, the Trophy Case was in the gym lobby.  I frequently gazed at the trophy with my name engraved on it:  "Most Sit-Ups by a Member of the Pep Band" -- Doug Kvandal '66

The trophy case was in the building where the assemblies were held.  It was in the foyer before entering the seating area.  I remember this because I used to go with Mrs. Knudson, the Choral Director, to pick up the trophies used for music awards.  In fact my name was on one or two of them.  Woo, woo -- Stephanie Rose Petersen '74