IT’S PITCH BLACK AND COOL IN PB, but it’s supposed to warm up nicely.  I’ve got a 10:30 annual eye check up near Costa Verde Shopping Center and I’ve got my fingers crossed we can to to Coco’s for lunch.  My old Coco’s on Sports Arena has been a U-Haul Rental agency for several years. 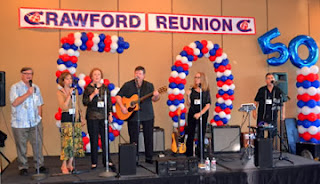 Whew!!  The Class of ‘63 Reunion is over — but you can look at the pictures.  I’ve posted three of John McMullen’s photo shoots on the Reunion Page of the web site — Friday Night at the Amigo Spot, Saturday Night at the Bahia, and the Saturday Night Elementary reunion group shots.  These are Picasa slide shows.  I don't know if you'll have to sign up for something to view them.  Oh, if you can help me with the names I missed or messed up, go ahead and EMAIL me. 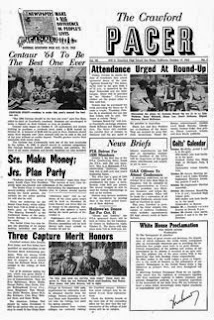 The October 17, 1963 Golden Anniversary Pacer was six Pages — maybe because it was National Newspaper Week.  I especially enjoyed the photo of Judy Frederickson and her Ford Model A.   Click HERE to read the whole paper. 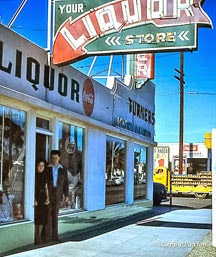 Bill Paxton ‘66 forwards a shot of his parents’ liquor store circa 1948.  He thinks it might have been on Adams Avenue.  The enlarged version, viewable on the Colt Corral blog or Facebook, makes me want to say that’s the Ibis Market in the background.  It’s still there, on Ibis and Fort Stockton, in Mission Hills.  We await more educated guesses.  Oh, and check out the Coke delivery truck in the background. Click HERE to enlarge the photo. 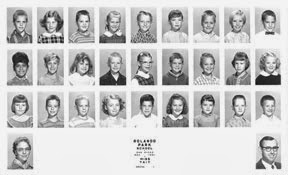 Ron Smith ‘72 checks in from George, although he may be in San Diego as we speak — or email.  He’s forwarded some Rolando Park and Little League goodies.  I’ll start with his Kindergarten, 1st Grade, and 2nd Grade photos — plus the 1966 6th Grade graduation roster.  I don’t know if he still has his 4th through 6th grade photos.  Click HERE to see what I’ve posted.