IT'S SUNNY and still cool in PB and Nancy's not coming down until this afternoon.  Her daughter Leanne is heading home from a visit to Syracuse, by way of Cincinnati, and is due in at 10 PM on Delta.  That flight landed at 12:30 last night.  My bed time is 10 PM.  Could be a problem on the horizon.

I'm still chuckling over the fellow yesterday who was heading to Del Mar for the races.  "Sure hope I break even," he said, "I could really use the money."

Elaine Robinson Davis '61 has returned from her new home in Missoula, Montana to be the featured artist at Gallery 23, Southwestern Art, Spanish Village in Balboa Park, from August 16th to the 31st.  Gallery hours are 10-4:30.  She hopes old friends will come down and say hello.  While you're there, you might want to ride the carousel or the miniature railroad.  Oh, wait -- maybe they don't allow adults on those rides.  A good excuse, though, to have you CHECK OUT the train photos Bill Ross '65 shared some time back. 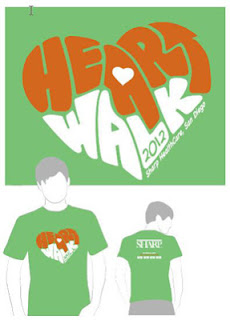 Some time ago Doug Kvandal '66 sat with me at The Amigo Spot and told me his heart condition had gotten bad enough that he was going to be admitted to Sharp Hospital and would not be getting out until he had a new heart.  Less than a week later -- on Easter Sunday no less -- word filtered back to me that the deed was done.  Three months later Doug was behind the keyboard for the Live Jazz concerts at The Amigo Spot on Saturday nights.  On September 15th he will be taking part in Heart Walk 2012 in Balboa Park and would like you to join him, or perhaps just purchase one of the cool T-Shirts seen above.  Click HERE to learn more about Doug's story and the 22nd Annual Heart Walk. 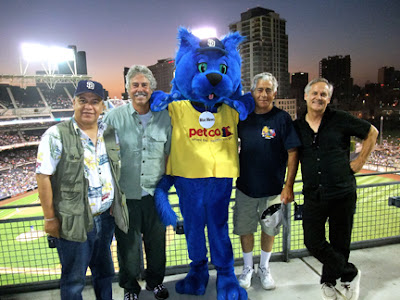 Talk about the "Elephant in the Room"!!  Victor Perez '71 forwards snapshot of a few of his classmates gathered this past Tuesday at Petco Park for the Chicago Cubs game.  That's Victor on the left, then Lewis Galpert, the Blue Mews (David Feeley), Phil Piscopo and Robert Leidolf.  I guess I could Google it, but I'm gonna wait for Victor to explain what a Blue Mew is.