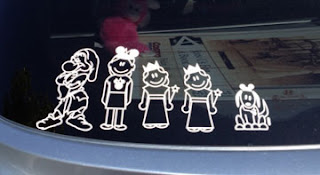 I must have walked by it 50 times, but never did pay attention to the smarmy little elves Nancy affixed to the rear window of her Tucson.  It was only after the snickers and furtive glances became overpowering that I examined the little quintet.  Reading from right to left I determined that the dog was  Leanne's little ball of fluff Phoebe. The two girls in tiaras would be Nancy's daughters Leanne and Lisa.  Wearing the mouse ears would be Nancy herself.  Holy Crap!!  She made me Grumpy the Dwarf!!  That hurts on a couple of counts. 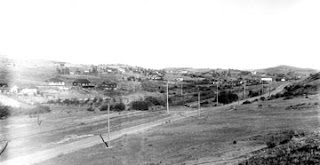 This 1915 photo of Encanto was printed from a cracked glass plate negative with a light leak on the left.  I was able to doctor up the crack but not the light leak.

Remember that video of the 1945 military Harley Davidson owned by David Bieber '69?  David's getting ready to saddle up the bike and go "Across America".  He's hoping to raise $4500.00 for the Wounded Warrior Project.  Click HERE for more information.  You can also send a check or money order to David Bieber, PO Box 907, Chula Vista, CA 91912. 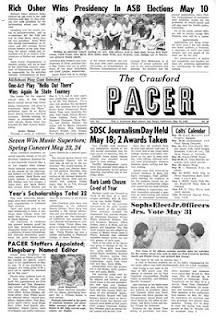 The Golden Anniversary Pacer is from May 23, 1963.  Rich Osher was elected ASB President, Anne Kingsbury was named editor of the Pacer, Barbara Lamb was chosen Coed of the Year, Dennis Rubin's Dodge Lancer won the Crawford Car Show, and Bob Brunner and Gary Byrnes were named Athletes of the Month.  Jeez, now you don't even have to read the paper. 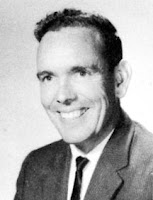 Marion "Herr Mac" McAnear taught German, and English -- and coached soccer -- at Crawford for many years.  He passed away April 19th.  You can read his obituary and sign the guestbook at Legacy.com

Mail sent to Alfred Torres '70 was returned by the post office with the hand-written note that he passed away on December 6, 2011.  (Actually it said "past away" which was charmingly similar to castaway.)