Overheard at Starbucks: "Halloween must be coming up.  They've got the Christmas decorations out at Walmart".

"Honey, they're playing OUR song."  I think it was "Moon River" when I graduated in 1962.  I read in this week's Los Angeles Times that the lovely Rihanna has a new tune, "Bitch Better Have My Money".  Awwwww.  Makes you wanna cry.

Diane Bell, in yesterday's U-T, congratulated Bob Watkins '61 on his induction into the U. S. Rugby Hall of Fame.  I wonder which Crawford coach he credits for his rugby success.  Click HERE to read Diane's column. 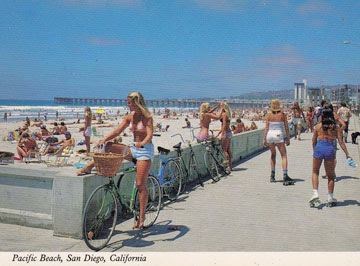 Unbelievable!!  You can buy a picture of my foot on EBay for $1.50.  Actually it's a picture of my shoe.  Well, it's really a postcard of me chatting with Julie Curren on her bike at the end of Reed Avenue around 1975.  A really sharp eye can spot the tip of my shoe atop the seawall at the very left. 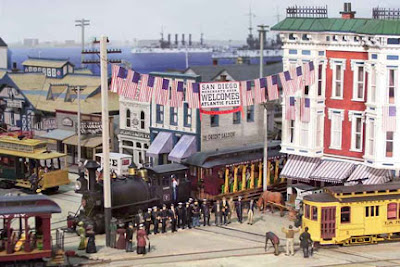 It's not very often that I see something that knocks my socks off.   Jon Tonnesen posted to Facebook the link to a model railroad replica of downtown San Diego as it looked in 1908 when the Great White Fleet anchored in Coronado Roads.  Click HERE to be astonished and amazed. 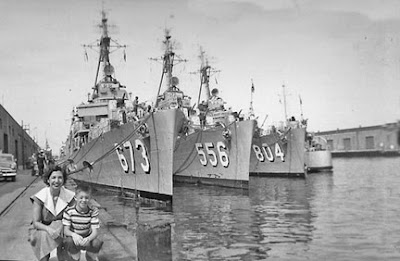 Here's another great Jagodinski photo taken on San Diego Bay.  Ron Jagodinski '62 and his mom Midge pose in front of three destroyers at Broadway Pier in late 1952.  Click HERE for an enlargement and additional details. 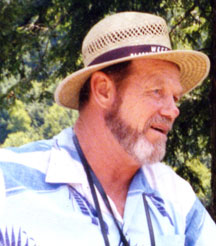 Doug Payne stumbled onto the Crawford web site and thought he'd forward a photo of his favorite grandpa -- Marcus Frye '60 -- who passed away in 2008. 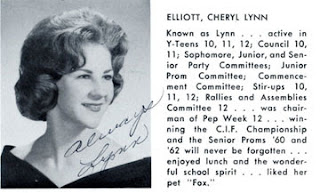 A full obituary for Lynn Elliott Townsend was published in last Sunday's U-T.  Click HERE to read it. 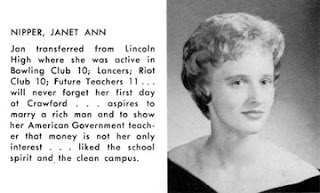