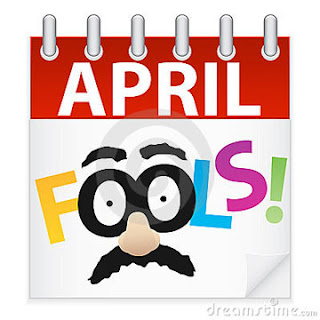 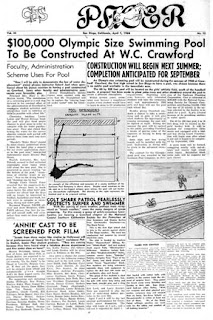 The perfect day to read the best April Fool's Day publication.  Click HERE to peruse the April 1, 1960 issue of the Pacer.

If you don't get your Fry Day email, go to the Colt Corral blog.  If THAT isn't current, then you can email me and ask if I'm OK.  Thanks for caring.

The plan, last Friday, was to breakfast at the Waffle Spot, then head out to the Barbecue Pit on Fletcher Parkway to pick up a Roast Beef Plate that I could put in the fridge to eat at a later date.  The Waffle Spot was packed to the gills, so we headed to Brothers on Waring Road.  A black pickup truck entered the lot ahead of us -- and took the last parking place.  Waring to Navajo to Lake Murray Blvd got us to the Lake Murray Cafe, where there WAS parking.  After that it was a short trip to the Barbecue Pit and smooth run back to the beach on Highway 52. 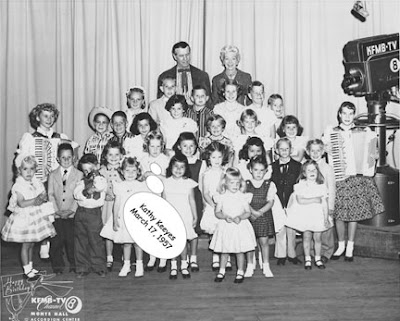 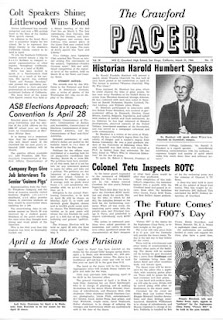 Click HERE to check out the March 31, 1966 Golden Anniversary issue of the Pacer. 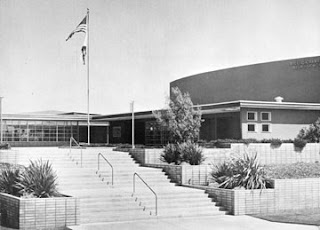 Turns out some of you have never visited my Crawford web page.  Click HERE and click on some links that will take you away from Facebook for a few hours.

Bad news -- Nancy Alumbaugh Bailey Rinck's second husband has passed away.  Good news -- Nancy's returning to San Diego.  You can find her email address on the Class of '60 Email Page. 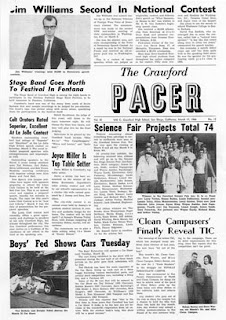 I continue to be a day late and a dollar short on the Golden Anniversary Pacers.  Click HERE to read the 6-page 1966 St Patrick's Day issue. 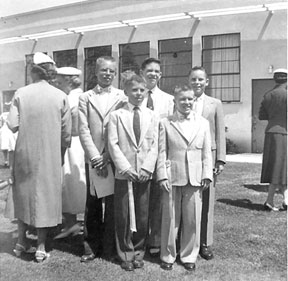 Ron Jagodinski has uncovered some old photos.  Here he is with four of his buddies at John Muir's 6th Grade Graduation in 1956. 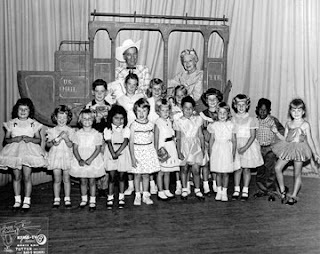 Last week's photo of SDSC professors whose children went to Crawford devolved into a mention of Monty Montezuma and, eventually, Monte Hall.  Seems like a good time to revisit my "Monte Hall, Uncle Russ, Smokey Rogers, Johnnie Downs and other Idols" page.   Click HERE to check it out. 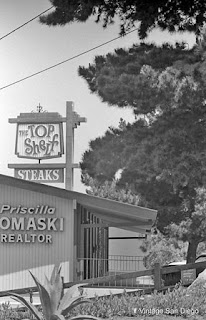 I don't think I ever dined at the Top Shelf, but I saw it from the freeway a thousand times.  I'll bet it brings back a lot of memories for a lot of Colts.  This photo appeared on Greg May's Vintage San Diego Facebook page this week. 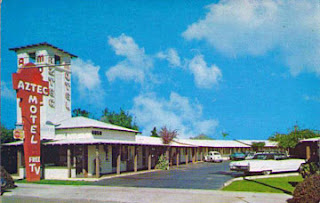 Greg May added another postcard to his Aztec Motel Facebook Page.  The address of the motel was 6050 El Cajon Blvd.  He's included a link so you can see what's there today.  This is sounding familiar.  Have we already covered this? 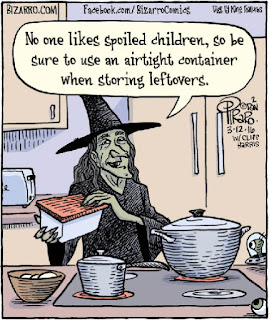 Hope you enjoy this Bizarro cartoon as much as I did.

I never heard back from Kelcie Butcher about the athletic shoes so I'm abandoning my "new shoes" campaign.  If you want to send a check contact Susan Marshall Gordon at smarshallgordon@hotmail.com about where to send it and who to make it out to.

In what has become an annual (or bi-annual) tradition, Joe Dyke ’65 reminds me that there is only one “S” in Daylight Saving Time.

That was NANCY Myers Woodward ’72 who shared news on the demolition of the Crawford campus -- not Kathy.

Dominic Gaccetta '73 checks in from Kingman, Arizona, where he is building a Missionary Training Center.  Contact him a pastord@gobadd.org if you want more information.

Debbie Nichols Poulos ’63 would like to hear from anyone with suggestions on how to publish her book about teaching Grades 4-6.  Her email address is dnpoulos@urcad.org

This 1955 photo of San Diego State faculty members accompanied a nice article on Professor John R Adams in the Spring 2016 issue of 360: The Magazine of San Diego State University.  I'm wondering how many of them had children who went to Crawford -- such as Richardson, Sorensen, Lamden and Schrupp.  Click HERE to read the article and see an enlarged copy of the photo.

Got to thinking about Oscar's hot apple pies.  Click HERE to check out the whole menu.  There's a lot of Oscar's memorabilia on the Memories Page. 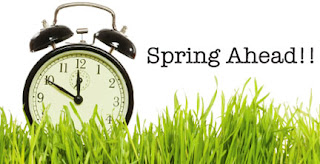 Daylight Savings begins at 2 AM on Sunday, so set your clocks ahead before you hit the sack.  It's gonna be dark in the morning but -- yippee -- staying light later at night.

I'm hearing from a number of you that you miss the old emails where I talked about the weather and where Nancy and I were headed for breakfast.  We pretty much head to the Waffle Spot on our Monday and Friday breakfast ventures.  The Eggery is now the Truck Stop, which is my Sunday morning venue with my long-time pals Tom and Jeff.   The Green Flash morphed into one of those places with loud music, bar stools and Mimosas, so that's out.  Mike Crawford closed Good Time Charlie's and Mission Valley's Adam's Steak and Eggs have both closed.  On the weather front, I finally reached the top of a three-month waiting list for a new roof last week, just in time for Monday's thunderstorms.

I got to meet Dave '69 and Linda Roberts Ponsford '70 last week.  We were all dining at Pernicano's, where Patriarch Johnnie Pernicano still plays the piano, until he walks across the restaurant to take up the vibes.

It was SHERYL Leonard Bodzak '70 who checked in from Castle Rock, Colorado last week -- not Susan.

Athletic Director Kelcie Butcher is asking for your used athletic shoes.  I'm prepared to purchase a pair of new shoes for a Crawford Athlete.  I called Kelcie and learned, if dreams do come true, she needs:  10 pair of baseball cleats, 10 pair of softball cleats, 30 pair of track running shoes and spikes, and 5 pair of Volleyball shoes.  Obviously I have no idea how much shoes cost, but I'm gonna double my offer.  Get back to me if you want to join my team.  In the meantime, the used shoes are still very welcome. 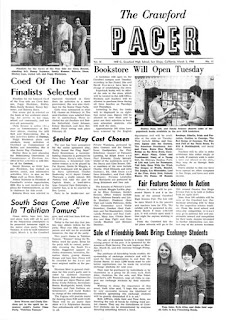 Had I remembered to include the March 3, 1966 Pacer last week it would have been almost EXACTLY a Golden Anniversary Pacer.  Click HERE to read all six pages. 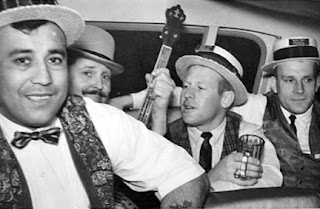 Mike McKittrick '60 shares a photo of himself (with a beer stein) and his buddies Chuck, Hoot and Guenther heading for the first taping of the Mickie Finn Show.  No, he wasn't in the band.  He claims to have worked in "customer satisfaction". 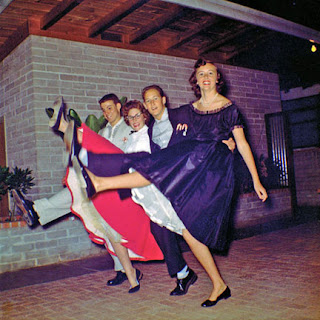 Some years ago Bob Richardson '61 sent a couple of photos from a Christmas party at his house that he thought was either in 1955 or 1956.  He's shared five more photos, but still doesn't know what year they were taken.  He hopes someone out there can help.  Click HERE to check them out. 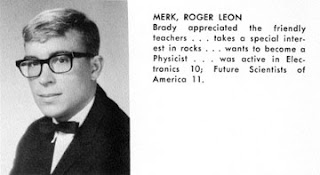 I've just learned of the passing of Roger Merk '66 on November 3rd.  He grew up in South Dakota but came to live with Aunt Myrtle at 17 when both of his parents died.  Click HERE to read the obituary and send condolences. 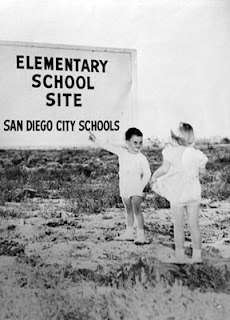 Susan Marshall Gordon '64 found this photo, in her mother's things, of the sign that preceded the building of Oak Park Elementary.  Click HERE to see an enlargement. 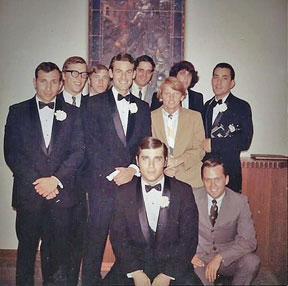 Why didn't Bill Kousens join his '64 classmates at Richard Degen's wedding.   Click HERE to learn the rest of the story.

Speaking of 1964, I've just come across a 1:45 minute YouTube video of Channel 8 news.  If you're as old as me you'll remember Ray Wilson, Bob Regan, Doug Oliver and Harold Keen.   Click HERE to check it out. 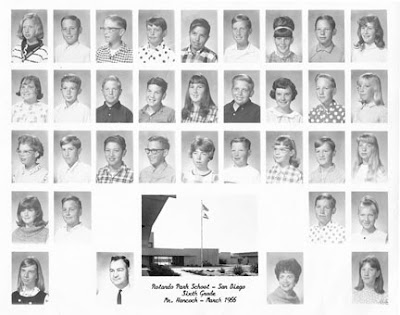 Ron Smith '72 shares his Sixth Grade photo from Rolando Park.  I've added the photo to those he shared previously.  I'm not sure which one Ron is.  Chuck Rainey might be there somewhere also.  Click HERE to check out an enlargement 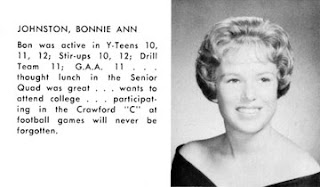 One of the back-logged emails I got last week was from my classmate Vicki Holman Sawders, who shared the sad news of the passing on August 6th of her best friend from age 5, Bonnie Johnston Knauer '62.  You can still sign the Guest Book. 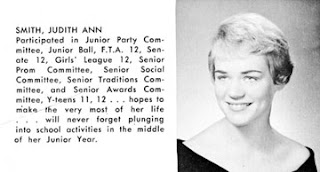 We've just learned of the passing of Judie Smith Cagle '60 on December 10, 2009 in Aurora, Colorado