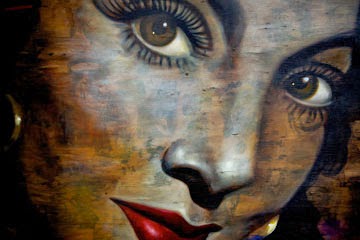 The Grand Opening of the Emerald Gallery C in Coronado on October 3rd will feature the art work of Elaine Robinson Davis ’61.  She hopes you can attend the opening, because she won’t be able to.  She and Charles had previously booked a trip to Croatia, so there you go.  The address of the gallery is 1331 Orange Avenue and the party goes from 5 to 9 PM.  Take pictures (if it’s allowed) 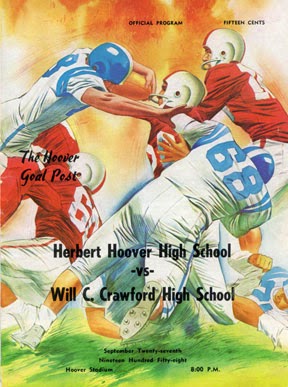 Where were you 56 years ago tonight?  OK – tomorrow night!!  Horace Mann 9th grader Lynn Routt was at Hoover Stadium rooting for the Colts.  Actually I’m just assuming all of this.  Lynn was the one who loaned me the program from the game.  Click HERE to check out all four pages.

John McGuigan was in town for the ’64 Reunion and took his wife to Sushi Time on Federal Boulevard near College Avenue.  He got to thinking about a house and a grave site that once stood on a knoll near the intersection.  “There was always a large American flag flying there,” he recalled.  John asked if I knew anymore.  Oui -- but of course.  When I was a toddler in Spring Valley, we often drove by that site well before Highway 94 caused it to be relocated.  Polish Princess Filomena Wojciechowski Sledzinski was buried there.  Click HERE for "The Rest Of The Story". 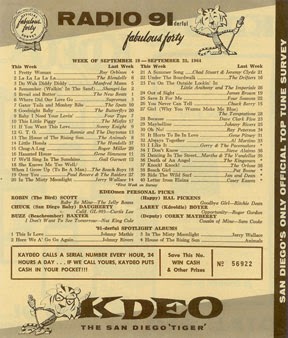 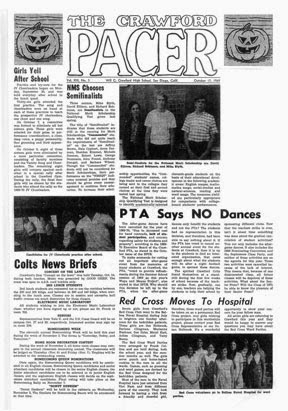 Ed Schoenberg sent me some Pacers a while back, three of which were not already posted.  I’ll share the October 17, 1969 issue today.  Click HERE to read all four pages. 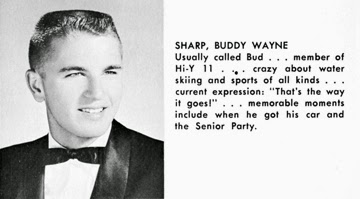 Buddy Sharp ‘60 died September 5th at his home in Hermiston, Oregon.  He was a retired aircraft mechanic for PSA and, later, USAir. 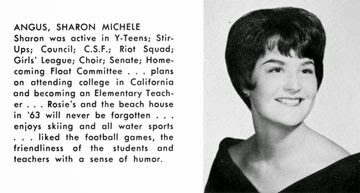 Barbara Earley Powell ‘64 sends the sad news that her classmate Sharon Angus Piscopo, wife of Phil Piscopo ‘63, passed away May 22, 2014.  We believe more details will follow. 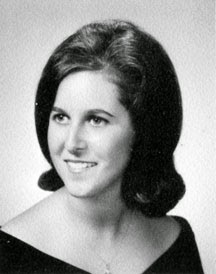 I have just learned of the passing, on October 10, 2010, of Joanne Lindsey Crispell ‘67.  At the time of her death she was survived by her mother Lenora and brother Bill ‘59.

FIRST THURSDAY AT THE AMIGO SPOT WILL BE OCTOBER THE TOOTH.  It says 6 PM, but the regulars are halfway through dinner by 5:30. 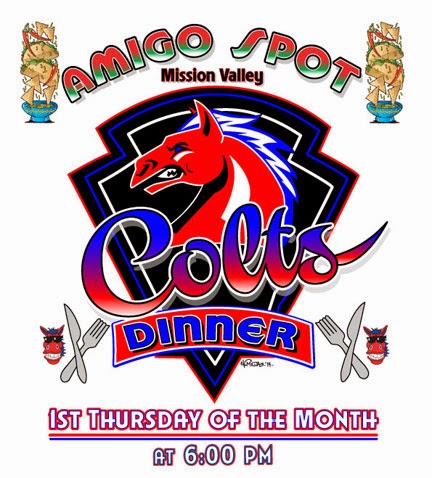