IT'S DARK AND WET in Pacific Beach -- Day 14 of the Kitchen Remodel.  The guy comes today to measure for the granite countertops.  I wonder if I'll have running water by Valentine's Day

Carol Traficanti Waldron ‘66 is trying to locate Carol Swenson ‘65.  Ace Investigator Mary Gale Rogers thinks she may have moved to Texas.  We were unable to find her.

Sue Weetman ‘68, who apparently got some nice responses in her quest for Centaurs, is looking for Jay Easton ‘66.  I did a quick Google search and came up with a Jay Easton who played for the San Diego Symphony.  A lovely fellow — who graduated from high school in 1993.  My database lists 4 Eastons — Jay, Marjoree, Steven and Weston (I’m not making the last one up) -- all of whom are on my missing lists. 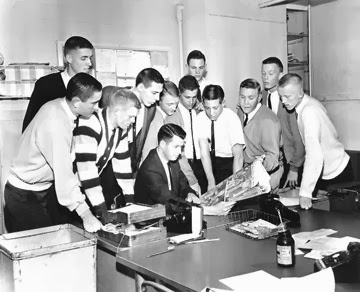 Nick Canepa’s piece in this past Wednesday’s U-T talks about Bill Center ‘63, who has apparently retired after 47 years on the U-T Sports Desk.  That’s Bill on the right with the ‘63 CIF Basketball champs and Coach Sams.  Click HERE to read Nick Canepa’s article and HERE to see an enlarged copy of this photograph. 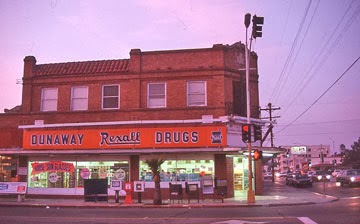 This has nothing to do with Crawford High, or even East San Diego, but I’ve begun to upload — on a daily basis — the best of several thousand photos I’ve taken in and around Pacific Beach over the last 35 years.  I’ll put the link on the Colt Corral blog or you can Google.  I took the above photo of Dunaway Drugstore, on the northwest corner of Garnet and Cass, on December 21, 1989.  It’s been a sushi bar for the last 20 years.  Click HERE to check out some of the other photos.