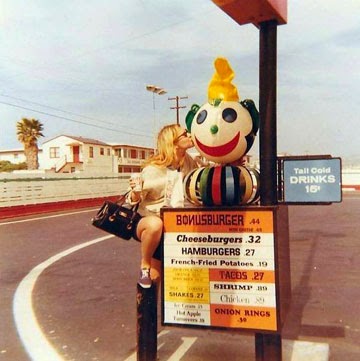 I wonder when Jack in the Box started offering French Fries, ‘cause this 1968 photo says French Fried Potatoes on the menu.  This is the Jack’s at PB Drive and Mission Blvd and that’s ‘67 Mission Bay High grad Lynn Perryman giving Jack a big kiss.  Click HERE to peruse a larger version of the photo on my Jack in the Box web page. 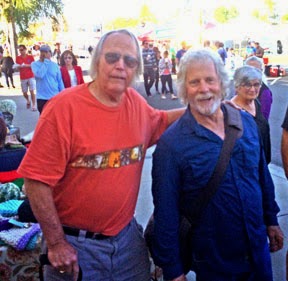 Lee Cook ’66 and Chris Hillman pose for a photo at Adams Avenue Unplugged last Sunday. Chris, who played with the Byrds, Flying Burrito Brothers, Manassas and Desert Rose Band, asked for copies of Lee’s songs Bostonia Ballroom and Texas Bounty Hunter, from the 2013 Lou Whitaker movie.  Chris said he played at the Bostonia Ballroom in the 1960s. 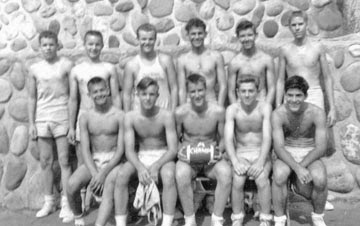 Dan Burton ‘66 shares a photo of the 1963 Horace Mann 9th Grade Football Champs.  Maybe you can help identify some of the winners.  There’s a bigger photo you can access if you click HERE. 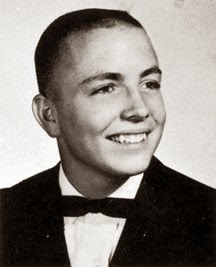 Richard “Dick” Schrupp ‘64 passed away unexpectedly on March 22 according to his brother Jim ‘61.  Click HERE to read a complete obituary and sign the guest book via the Colt Corral link

Looks like I'll be making my third trip to Bank of America in an attempt to get them to close Mom's checking account.  Now, the suits in Tampa, Florida say I never sent them a formal request.  No, they can't handle it in the branches anymore, although I've been told I need to go there to get the proper form. 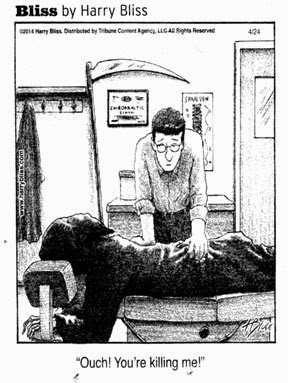 I couldn't resist sharing yesterday's Bliss cartoon.  That's the Grim Reaper getting what I assume is a deep tissue massage at the chiropractor. 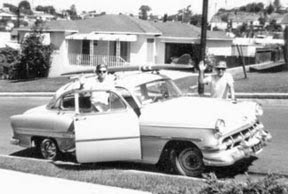 Gary Juleen ‘64 sent me a nice story and some snapshots of he and the late Phil Bonwell ‘66.  I’ll publish them in the June Alumni Newsletter.  In the meantime I’ve posted this shot of Phil and Gary on the Cars We Drove To School Page.  They’re departing the Juleen home at 4142 Vista Grande enroute to a surfing adventure in Ocean Beach. 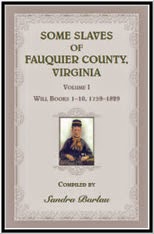 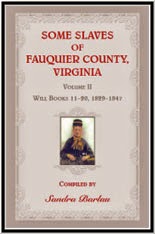 Sandra Harrison Barlau ’60 wanted to know how her second great-grandmother, Mildred Timbers, became a slave.  The result of her research is a two-volume work, Some Slaves of Fauquier County Virginia, published by Heritage Books.  The books are also available on Amazon. 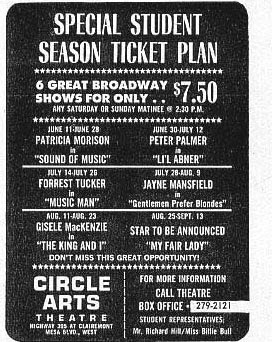 Remember Circle Arts Theatre out at Highway 395 and Clairemont Mesa Blvd?  Our family saw John Raitt in “Oklahoma” and waited for him after the show. The man was wearing lipstick and rouge!!  Anyway, this ad is but one of the many treasures in the April 23, 1964 Golden Anniversary Pacer.  Click HERE to read the entire issue.

Marla Quinci ‘75 passed away suddenly on April 17th.  She was a resident of Davis, CA and has two children — Olivia and Grant.  Marialyn Sardo ‘73 sent me a remembrance, which I’ve posted on the Class of ‘75 Obituary Page.  There is no on-line Guest Book or, as far as I know, scheduled memorial service. 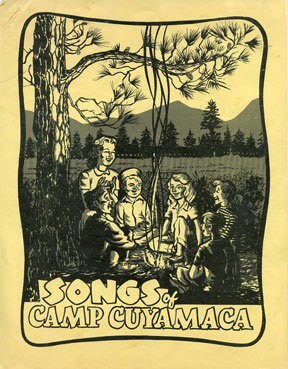 San Diego State Student Darryl Grier is working on a group project on 6th Grade Camp and its recent lack of funding by San Diego school districts.  If you went to 6th Grade Camp you could help him out by answering a few questions.  Click HERE to email him  -- and time is of the essence. 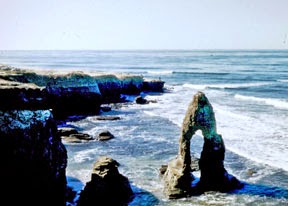 Remember The Needle’s Eye, off Sunset Cliffs?  Me neither.  Luckily Clarence Wetherill , father of Kent Wetherill ‘62, took a picture in November 1953.  It later succumbed to the forces of nature.  Click HERE to see an enlargement. 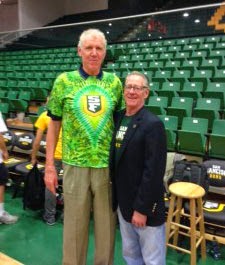 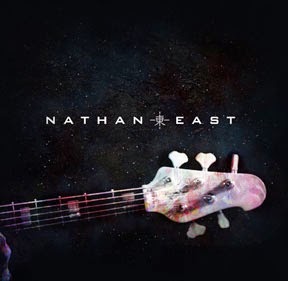 Nathan East ‘73 checks in with the good news that his new CD is #1 on the Billboard Contemporary Jazz Charts.  “Trying to keep San Diego on the map,” he adds.  Nathan credits Crawford stage band teacher Dennis Foster and Gunnar Biggs ‘71 for his interest in music.  Click HERE to watch him on the Tavis Smiley Show. 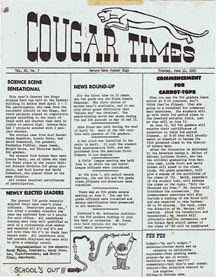 Susan Marshall Gordon ‘64 is the Crawford Foundation secretary and is desperately hoping someone out there has grant-writing experience and can give her some help.  Call or text her at 619-865-3410 or click HERE to email her. 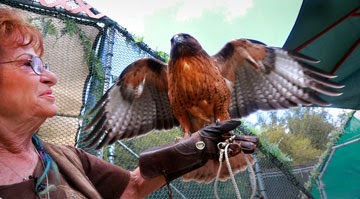 Nancy Alba Conney ‘63 poses with one of her rescued Red Tail Hawks.  Her Skyhunters non-profit rescue center was featured in Tuesday’s U-T.  The facility is open to the public by appointment and will be added to this year's Sage and Songbird Festival and Garden Tour out of the Viejas Outlet Center May 2-4. (Photo credit: Peggy Peattie/UT San Diego/ZUMA Press) 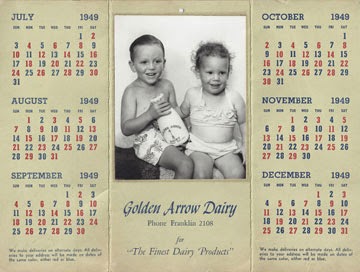 Too cute!!  Here’s a 1949 Golden Arrow Dairy calendar featuring Ted Hazelewood ‘63 and sister Dianne Hazlewood Buchanan ‘65.  Click HERE to see an enlargement.  I'm pretty sure it was 1949 when the milk on our Spring Valley porch froze and pushed up the bottle top. 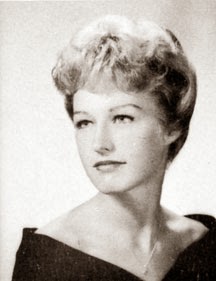 Sandra Hendrick Rhoads passed away March 6th of Cancer.  Services are being held this morning at 10 AM at the Church of the Nativity, 6309 El Apajo Rd, Rancho Santa Fe, CA 92067.  Click HERE to read more and sign the Guest Book