Turns out the November 3rd car show is part of the Class of '59's 60th Reunion Weekend and it's a benefit for the Crawford Alumni Association, which may not be the same as the Crawford Foundation. 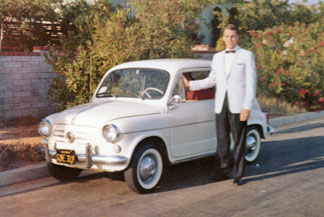 The November car show seems like as good of an excuse as any to revisit the Cars We Drove to School web page.  That's Ron Morse '64 above, on Prom Night with his 1962 Fiat.  Click HERE to check it out. 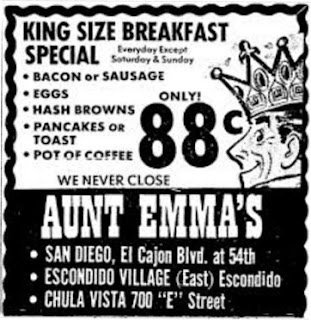 Don't know what year this was, but if I was working I was probably getting 88¢ an hour.  Click HERE to check out the Aunt Emma's page on my web site. 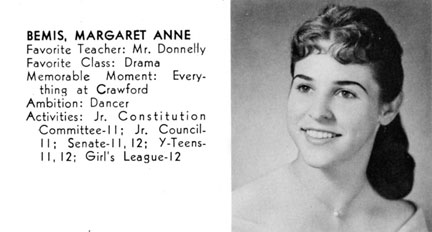 Margaret Bemis Dennison ’59 passed away a year ago, on August 14, 2018, and I’m just finding out.. After graduation Margaret traveled the country as a  professional dancer in Broadway productions, including Music Man with Forest Tucker and an appearance on the Steve Allen Variety Show. Margaret was also featured in many local performances at Starlight and Coronado Playhouse. After her dancing career she became a legal secretary, then an office manager, and a consultant for First National Oil Company.  She married Thomas Dennison in 1963 and the two raised three sons, enjoyed traveling and ballroom dancing. Her faith was an important part of her life and provided support during her lung cancer diagnosis and treatment. 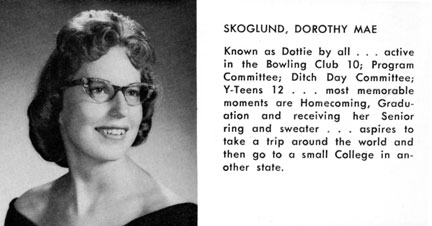 I just found the Facebook Messenger notice Greg Skoglund '67 sent a month ago noting the passing of his sister Dorothy Skoglund Ferguson '61 on June 13, 2019.  She passed away at home in Lake Charles, LA after a lengthy illness.