LOOKS LIKE IT'S gonna be a beautiful day in San Diego.  Nancy and I visited Mom yesterday at the Renown Alzheimer's facility on Tommy Drive.  She seemed a little better than last week, but I'm pretty sure she no longer recognizes me.  Fry Day promises visits to the post office, bank and library and maybe a nice drive somewhere.

It always seemed like the hottest day of the year took place during the first week of school.  Of course, that was when school started in the middle of September.  Last weekend's scorcher sent me on a Google search for the hottest day ever in San Diego.  I ended up on my own web site.  Click HERE to read once again the memories of folks who survived The Hottest Day Ever in San Diego. 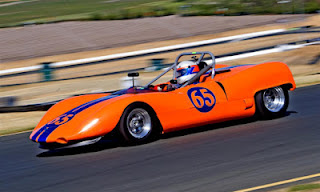 Don Anderson '64 would love it if you popped over the bridge this weekend and watched him raced his '64 Bobsy-Porsche (that's the two of them above) at the Coronado Speed Festival. 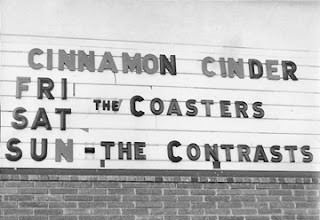 Wow!!  The Coasters and The Contrasts on one great weekend at the Cinnamon Cinder.  Click HERE to check out the great photos I found on Jan Tonnesen's Flickr page and read some of the comments.  Did you know the Cinnamon Cinder had been a bowling alley. 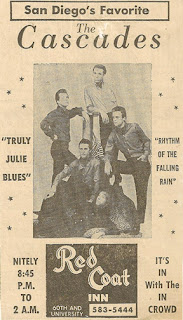 Dave Sleet '61 asks on a regular basis if I've come across anything on his old band The Cascades.  I keep thinking I should be asking HIM for stuff.  I found this ad from the Red Coat Inn on Jan Tonnesen's Flickr page and added it to the University Lanes page of my web site.  Click HERE to take a look. 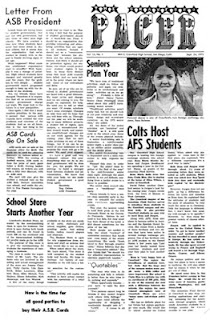 Last year we took a look at the collection of Pacers from 1970-1971 donated by Velinda Clanton Peterson '72.  This year we'll look at the 1971-1972 series.  The first issue was already on the web site, donated by Ken Burton, so we'll start with that one.  Click HERE and enjoy. 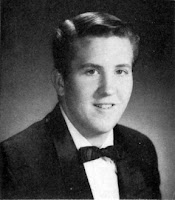 Rod Petersen '61 passed away "a year ago" according to his daughter.  I've posted some of what she shared on the '61 Obituary Page. 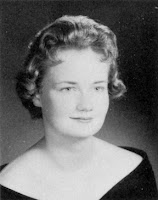