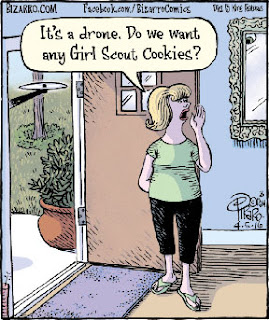 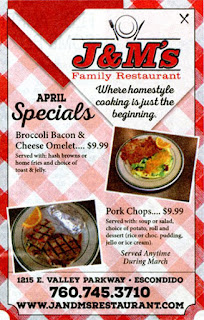 Yippee!!  J and M's is featuring Pork Chops as one of its April Specials.  Now all I need is a ride to Escondido.  Oh, wait -- what does it say in fine print?  "Served Anytime During March".

Tom Clancy and I both wrote military books.  He used his royalty checks to buy part of the Baltimore Oriole baseball team.  I may cash my $25 check and head out to the Wrangler Barbecue in El Cajon. Turns out George Glover '73 is part owner.   George got his start at a barbecue place in the shopping center at 63rd and El Cajon. 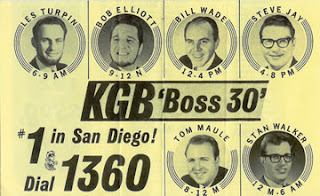 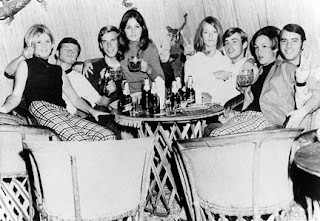 Jim Kermott '67 shares a classic photo of Colts and Cardinals from the "Colt Country Club".  Jim says that was any bar in Tijuana on a Friday or Saturday night.  Click HERE to see what they're drinking.  Must've been something special 'cause at least two of the couples got married. 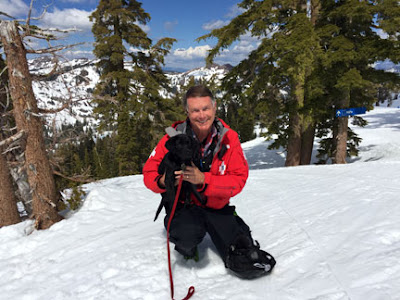 John McGuigan '64 poses with Trooper, in a photo taken earlier this week in Squaw Valley.  Trooper is the newest Squaw Valley Avalanche dog, also known as Squawdogs.  John is in his 13th year as a Volunteer Ski Patroller. 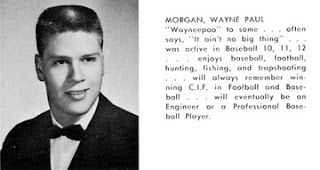 I've just learned of the passing of Wayne Morgan '64 on March 14th in Bullhead City, Arizona.  Click HERE to read an obituary.