A WOMAN TAKES HER GRANDSON to the beach and turns her back on the child long enough to spread out the beach blanket.  A giant wave thunders on to the beach and takes the tyke back with it.  Horrified, the woman drops to her knees and beseeches the heavens to return her precious progeny.  Incredibly, the next wave deposits the child at her feet.   She clutches him in a heartfelt embrace then, holding him at arms' length, again raises her eyes to the skies.  "He had a hat" she said.
I was reminded of the joke as Nancy and I sat on the curb last Friday answering questions from the Paramedics.  We had decided to visit the Tall Ships on the bay after dropping off subscription envelopes at the Midway Post Office.  I swerved to avoid a car that stopped in front of me on Rosecrans and took out a number of trees in the center median before hitting one that stopped the car and set off the air bags.  Nancy and I emerged without a scratch, although I was missing the top button on my $10 Albertson's Hawaiian shirt.

A good time was had at the Amigo Spot last night by both the Class of '66 contingent and a cadre of '62 classmates who gathered to fete a visiting Helga Ritter Skinner.  They may have convinced her to leave her Tennessee lair for the reunion next month.

It's back to the Midway Post Office this morning to deliver 576 copies of the September Crawford newsletter.  At noon Nancy and I are being treated to lunch at the China Inn by Penny Bobrof and Lynn Routt Swanson.  (No I don't know why,  I'll have to assume it's my good looks) 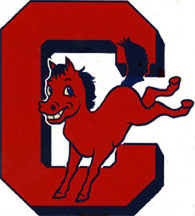 Stan Keniston '66 shares a link from KPBS entitled "Meet Crawford's New (And Only) Principal".  That's right, the campus has reverted to a one-size fits all school.  Click HERE to read the article. 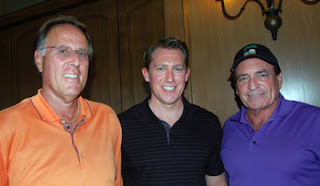 Susan Weetman Belair '68 spotted her classmate Earl Altschuler (that's him on the right) in a recent issue of the North County Times.  Click HERE to read the article. 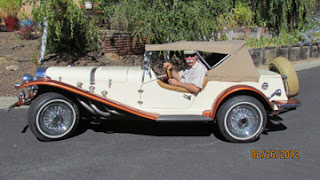 That's John Schroyer '70 behind the wheel of his 1929 Mercedes Gazelle.  Says John, "With a Mustang II chassis and new Ford motor, this car zips along on any freeway".  He also says you can find him on "any given Sunday in front of the IHOP in Martinez, California.