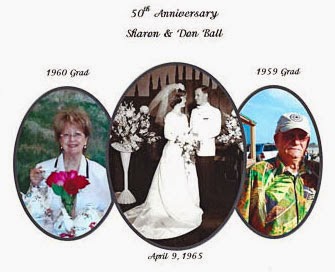 Don Ball '59 and Sharon Bentley '60 were joined in Holy Matrimony on April 9, 1965 at the Wesley Methodist Church at 54th and El Cajon Blvd.  Recalls Don, "During the ceremony it rained and hailed a lot.   Afterwords my best man, the late John Whaley, drove Sharon's 1963 Mercury Comet to the Town and Country in Mission Valley.  However, the San Diego River had flooded most of Mission Valley and some guests could not get into the parking lot.  Next day we flew from the old Lindbergh Airport to San Francisco."  If you'd like to send congratulations, Don's email address is gardenlife65@gmail.com 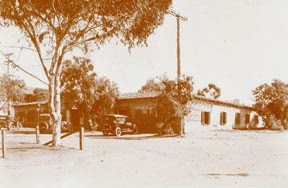 Anybody have any ideas on what to do with 1,000 Ramona's Marriage Place postcards?  I published the cards 35 years ago, using -- I believe -- a 1928 Walter Averett photo from the San Diego Historical Society.  Unlike some of the other cards in the series, they never sold. I thought maybe I would donate them to the gift shop of the Estudillo House (there never was a Ramona and she didn't get married here) but I don't think there IS a gift shop in the Estudillo House.  It's part of the State Park System I believe. 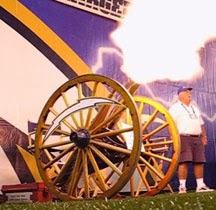 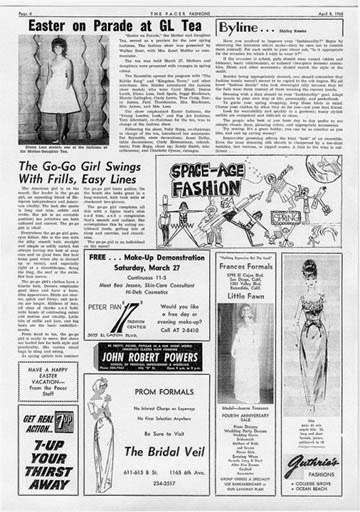 That's Diana Loss pictured in the 1965 Spring Fashion Issue of the Pacer, published on April 8, 1965.  Shirley Strum was Girl of Month, while Robert Malcolm Kaplan and Lois Jean Olson were Senior Sketches

Dennis Burns says he's no longer missing.  He's living in El Cajon and is now on the Class of '65 Email Page.


Scott Silverman '72 got a nice write up in Diane Bell's column this week. 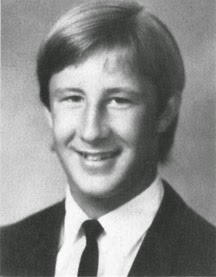 The U-T San Diego, on April 3, reported the passing of Danny Griggs.  He was born October 3, 1954 and died February 23, 2015.  We think he was the Danny Griggs in Crawford's Class of '72.  Does anyone know if Danny had sisters or brothers who went to Crawford?