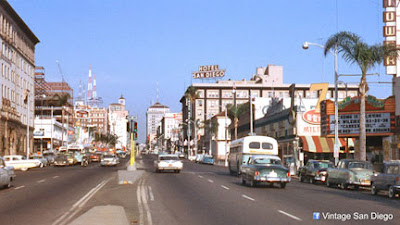 I love this photo of lower Broadway posted on Facebook and thought maybe I'd used it before.  It appears to be circa 1960.  There's an Edsel going east and a VW headed west.  I blew up the marquee on the Tower Theater thinking the name of the movie would help determine the year.  It didn't, but I'm still thinking about what it said -- "You Won't Believe Your Eyes.  June Wilkinson. 43-20-36." 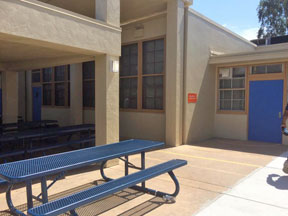 I'm not sure if Danielle Remer went to Crawford, but she DID attend Euclid Elementary and took this picture at the 100th Birthday Party this past Wednesday.  I believe she posted on Facebook that this was a portion of what remained of the older part of the school. 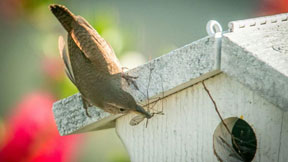 Ernie Cowan '62, "The Bird Man of Escondido", wrote a nice article in this week's U-T entitled "Sit Back and Enjoy the Show".  He's encouraging you to take an hour out of each day and soak up your surroundings.  Click HERE to read the article. 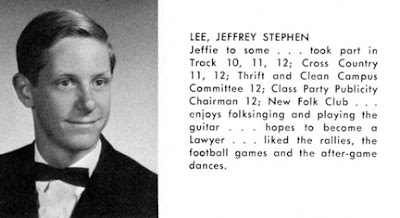 Details are still sketchy but Jeff Lee '66 died while mountain biking in Rancho Penasquitos on Tuesday.  As a member of the band "Oh Ridge", he put smiles on the faces of thousands of fans.  He entertained at a couple of the First Thursday meetings at The Amigo Spot and managed to reword one stanza of Margaritaville that caught my attention.

Wasted away again in Margaritaville,
Searchin' for my lost shaker of salt.
Some people claim that there's a woman to blame,
Now I think it’s all John Fry’s fault.