Remember when we went back to school in the middle of September?  Judging by the recent Walmart television ads, somewhere kids are headed back much, much earlier.

Canterbury Gardens, in Escondido, is now open for those who want to do their Halloween shopping early.

I love Big Bang Theory, but I have to enable Closed Captioning because Bernadette's voice is too squeaky for me to understand.  CC was still enabled later when I was watching the Padres and Mark Grant, after a spectacular catch by Hunter Refroe, compared him to Mikhail Baryshnikov.  Seconds later the printing on my TV screen quoted it as Mikhail Gorbachev.  Conjures up an image doesn't it? 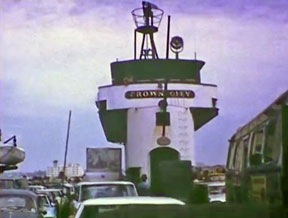 Wanna take a ride on the ferry boat Crown City to North Island and check out the Grumman A-6 my childhood buddy Ken Ptack (Hoover '60) flew in from MCAS Cherry Point?  I shot the film on July 19, 1969.  The last ferry run took place August 2nd, and the bridge opened August 3rd.  Hey -- that's TODAY!! Click HERE to watch the 3:30 minute film on YouTube. 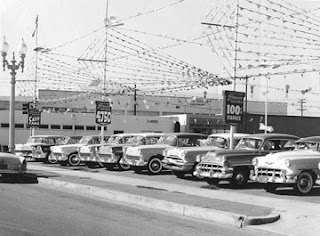 I came across two more photos that Howard Rozelle shot of Esquire Motors on El Cajon Blvd.  Now that I'm able to add stuff to my web site again, you can see all three photos.  Click HERE.