IT'S DARK AND ALMOST WARM in Pacific Beach.  I'm not sure what's in store for Nancy and I.  I do know she and her two grown daughters are planning to drive to Lake Arrowhead and spend the night. 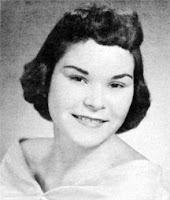 Anne Brownell Sarsfield '59 passed away March 15th.  She was born in Colorado Springs, but came to San Diego with her family to live with her grandparents when her father joined the Army in WWII.  A '63 graduate of San Diego State, she was delighted to have President John F. Kennedy as her Commencement Speaker.  Click HERE to sign the on-line Guest Book.

You don't need me to tell you things have changed at Crawford High School.  Earlier this month I listened to the Colt baseball coach ask if anyone could donate equipment for his team.  At the 1963 ASB Nominating Committee, held in the gym on April 30, Principal George Parry introduced City Manager Thomas Fletcher as the Keynote Speaker.  By the way, no refreshments were allowed in the gym -- and you could not leave until the convention was officially concluded.  Click HERE to read the entire program. 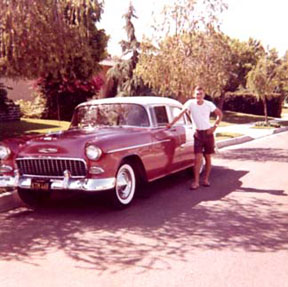 Alan Osborn '64 poses in front of the family home on Aragon Drive with "The Car He Drove To School" -- a '55 Chevy.  Click HERE to take another look at what the other kids drove. 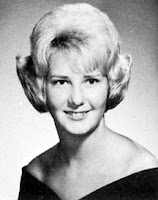 Carole Riley Erickson '64 died on February 15, 2013, according to her childhood friend Freda Robinson Hart.  There are a few additional details on the Class of '64 Obituary Page.

Camellia Mize Fedder '69 passed away on March 3, 2013 reports her husband and classmate Alan Fedder.  There is more on the Class of '69 Obituary Page. 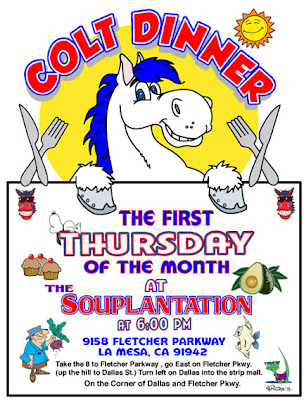 I think Ron Klein has finally solved the maddening "Individual Check" problem at the First Thursday function.  The party is moving to the Souplantation on Fletcher Parkway.