IT’S DARK AND COMFY IN PB — but the weatherman says record heat is coming today.  Nancy and I will drop off newsletter subscription envelopes for the Classes of ‘63 and ‘73 at the Midway Post Office, then head over to the Waffle Spot for a late breakfast. 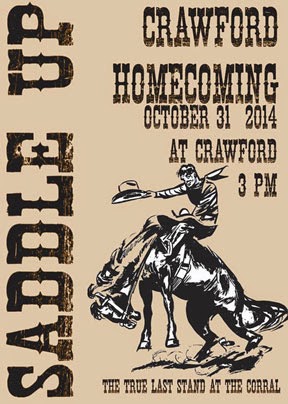 The last homecoming to take place on the old football field will be held on Friday, October 31st, at 3:30 PM.  Susan Marshal Gordon says she needs convertibles for the parade.  Call her at 619-865-3410 or email smarshallgordon@gmail.com 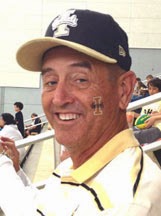 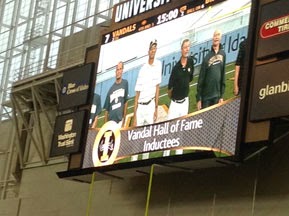 Proud sister Cheryl Hembera Lang ‘62 wants you to know that brother Steve Hembera  ‘66 was recently inducted into the University of Idaho’s Athletic Hall of Fame.  That’s him on the big screen with other members of the 1969-1970 tennis team.  That's a Vandal's decal on Steve's cheek, by the way.

Remember the photo Adare Mcallister took of Mission Valley from the Serra Museum in March 1952?  I think he took this one at the same time.  It looks toward La Jolla with the railroad tracks, Morena Boulevard, and the old Cudahy Packing Plant in the foreground.  Click HERE to see a much larger version.
Linda Buss Donahue checks in from Seabeck, Washington.  She is now on the Class of ‘73 Email Page. 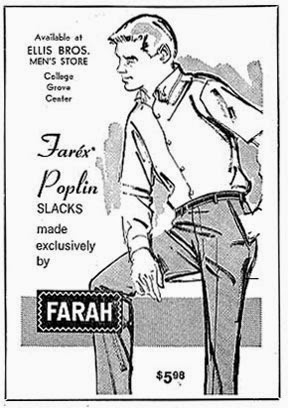 I couldn’t resist this ad for Farah pants in the October 1, 1964 Golden Anniversary Pacer. There’s also one for Frederick's of Hollywood.  Click HERE to read all four pages. 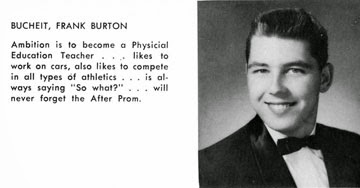 Gary Morris ‘61 shares word of the passing on September 4th of his classmate Frank Bucheit (above).  You can read Frank’s recollections, and sign an on-line guest book, on the Class of ‘61 Obituary Page. 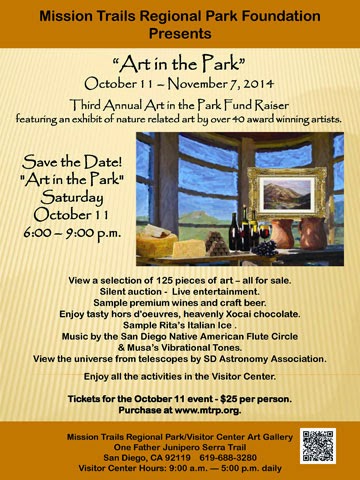 Marlene Kolender Korey ‘59 will have two of her works on display at the Third Annual “Art in the Park” Fundraiser for the Mission Trails Park Foundation on Saturday, October 11th.  Hopefully you can read the details above.  Click HERE to go to the Mission Trails web site, and HERE to check out Marlene's web site.